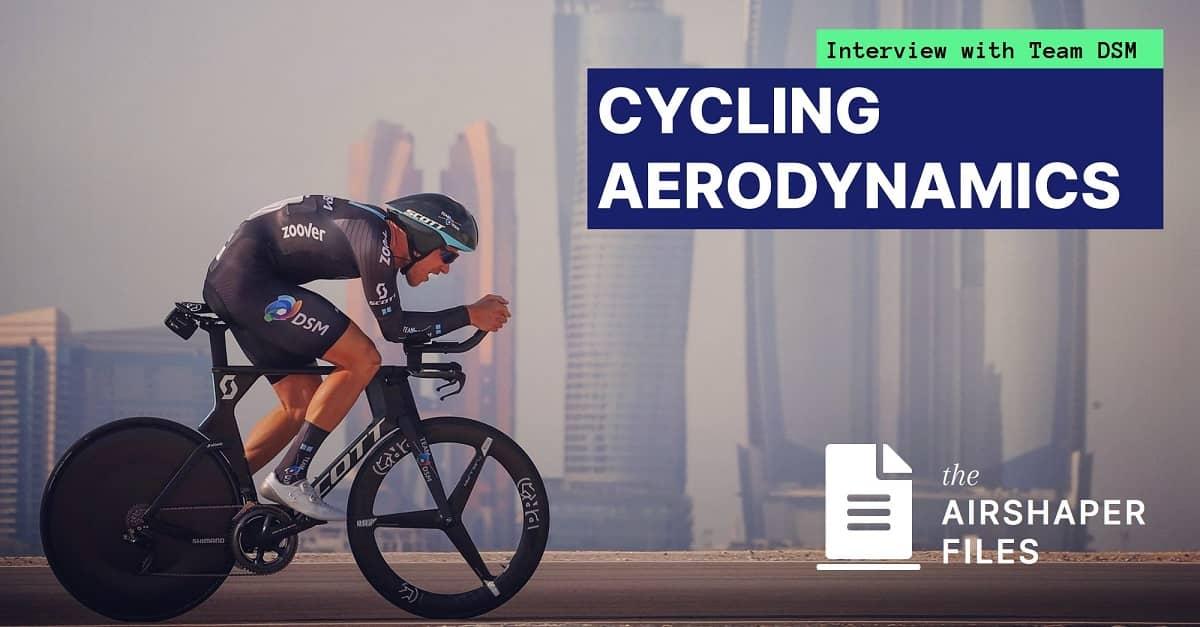 In modern cycling, there is a continuous search for marginal gains. Bicycle manufacturers, cyclists and teams are constantly trying to find new ways to take their performance to the next level. Team DSM is one of the most performance (and science) driven teams in the UCI World Tour. We had the chance to talk with Team DSM’s Aerodynamics Expert, Harm Ubbens.

Harm studied an MSc in Aerospace Engineering at the Technical University of Delft. During his degree his interest shifted from airplane to sports aerodynamics and he completed his thesis on bobsleigh aerodynamics. He also helped design the wind tunnel at BikeValley in Belgium during his internship and later worked there as aerodynamicist and wind tunnel operator. At the beginning of 2020 he joined Team DSM as their Aerodynamics Expert.

A history of cycling aerodynamics

In the past, there have been a number of pioneers in cycling aerodynamics. For example, Greg LeMond in the finishing time trial of the Tour de France in 1989. He was the first cyclist to use an aerobar extension on his steer as well as wear a profiled time trial helmet. At that time, other riders wore just a cap, or nothing at all. This allowed LeMond to ride in a more streamlined position which gave him the competitive edge to win the Tour de France. He won by an 8 second time difference over the 87 hours of cycling.

Graeme Obree was another pioneer. Working towards his world hour record attempt in 1993, he built a bike using parts of his washing machine. He combined this with extremely compact or stretched positions on his bike, and broke the world hour record twice.

The importance of aerodynamics in cycling

In general, cycling can be seen as overcoming resistance. On the flats, about 90% of the total resistance a cyclist feels, is due to aerodynamic drag. If you can minimize this, the cyclist can go faster with the same power output; gaining time over their competitors.

When climbing very steep gradients, the relative importance of aerodynamics decreases as the importance of gravity increases. Luckily, there are many ways to reduce aerodynamic drag and improve performance through special clothing and custom components such as aero helmets and aero wheels.

Changing gravity, by contrast, is quite difficult. So aerodynamics is definitely one of the most important factors that can be influenced to increase performance. It is, however, important to always optimize it in combination with other aspects like ergonomics. The most aerodynamic position usually leads to a reduced power output and as such, does not make the cyclist faster.

In general, every pro rider is into aero aerodynamics, but you could divide the peloton into two groups. The first are those specialized in climbing. The second group are the more powerful riders. If you belong to the second group, you cannot ignore the significance of aerodynamics.

There are some examples of riders willing to do everything they can to go faster. World hour record holder Victor Campenaerts is a good example of a rider who is passionate about aerodynamics. He is prepared to do everything to improve his aerodynamics, including getting into some incredible positions.

The bike is an important part of a cyclist’s aerodynamics, but not as important as riding position. That's why amateur riders will get more value for money by optimising their position through a bike fitting than buying an aero bike.

Aerodynamic innovation within the UCI rules

Today, it’s still possible to improve the aerodynamics through continuous innovation in terms of production methods. The biggest evolution over the last five years is probably the integration of braking and shifting cables. These cables are round and tend to initiate flow separation, reducing the flow quality along the body and frame. Integrating these cables provides a significant reduction in aerodynamic drag.

Otherwise it has become difficult to improve the aerodynamics of a bike within the UCI rules. Typically, an aerodynamic bike is heavier due to the special shapes which has a negative effect when climbing. That is why manufacturers are now aiming to make aero bikes as light as possible. Examples of bikes that are both aerodynamic and lightweight are the Scott Addict RC and the S-Works Tarmac SL7.

When manufacturers switched from steel frames to aluminium ones, a lot of research was carried out on the shape of the tubes. This was again analysed when aluminium frames were replaced with carbon ones. The next innovation was the integration of brake cables which was then followed by minimizing weight.

The current approach often optimizes the bike, wheels, helmet etc individually without considering the interaction of the cyclist. Adapting their riding position to the equipment can lead to unpleasant ergonomics for riders. Therefore, in the future, we will likely see a more holistic approach where both the rider and bike are optimized simultaneously.

The aerodynamic drag on a cyclist can be split into skin friction drag and pressure drag. Skin friction is the result of the air sliding across the surface. It is literally the friction between the air and the skin or aerodynamic clothing of a cyclist.

When riding a bike on a levelled road, around 90% of the resistance is the result of aerodynamic drag. Because a cyclist is a bluff body (a non-streamlined object), about 85% of this drag is pressure drag and 15% is skin friction drag. Although 15% is not negligible, pressure drag is the most important factor. That is why the focus is on optimizing the shape of components and athlete position, rather than minimizing skin friction.

Our main techniques are track testing and wind tunnel testing. Track testing involves the cyclist tweaking their position while doing laps on a track. Obviously, it’s important to keep the power output constant and to ride the exact same line every lap. This is a clear drawback of this technique as not every cyclist can perform this test accurately.

Wind tunnel testing on the other hand allows you to improve small details in a controlled environment. The biggest downside of the tunnel, however, is that you’re working on a fixed position most of the time.

Keep in mind that the tests described above are done in ideal circumstances. There is no influence of any natural wind or rain. For this reason, outdoor testing is a popular tool to analyse the effect of aerodynamic devices. This provides more accurate results than the wind tunnel or track testing.

Our partner, TU Delft, developed an outdoor testing technology called 'The Ring Of Fire'. This is where a cyclist rides through a 'ring' of helium bubbles. As the flow pattern around the rider moves the bubbles, the bubbles are tracked by PIV (Particle Image Velocimetry).

Performing PIV measurements in open air allows us to gain more information about the aerodynamics of the individual cyclist. It also helps to learn which team tactics are best to implement in TT (Time Trial) and TTT (Team Time Trial) events.

Each type of testing has its own upsides and downsides. The kind of test we do depends on what data we want to get out of it. So in conclusion, we can state we use a combination of different techniques throughout our search for optimal aerodynamics.

When a new cyclist arrives at our team, the first task is to get a bike fitting to avoid injury during training. We then look for the sweet spot between their biomechanics and aerodynamics to achieve the best performance.

Our team aims to have the best specialists of each field work together as one team. Each opinion is equally valuable, without one person taking the lead. This ‘one team, one goal’ philosophy will eventually lead to the best possible performance of our cyclists.

The science behind cycling aerodynamics

At our team, everything is science-driven. That is why our team searches for the best specialists in every field. As far as I know, Team DSM is one of the few teams which works like this.

Most teams will have someone looking at the aerodynamics, but often that person has a background in biomechanics or sports performance. They know how to make a cyclist go faster, but my aerospace engineering background will hopefully take things to the next level. And I’m very grateful to be in that position!

Via new production techniques, crazy positions and innovative measurement systems, cycling aerodynamics have come a long way. The continuous search to improve even the smallest aspects will never end. We are very thankful to Team DSM and Harm Ubbens who were willing to share their knowledge with us.

The Ring of Fire - TU Delft