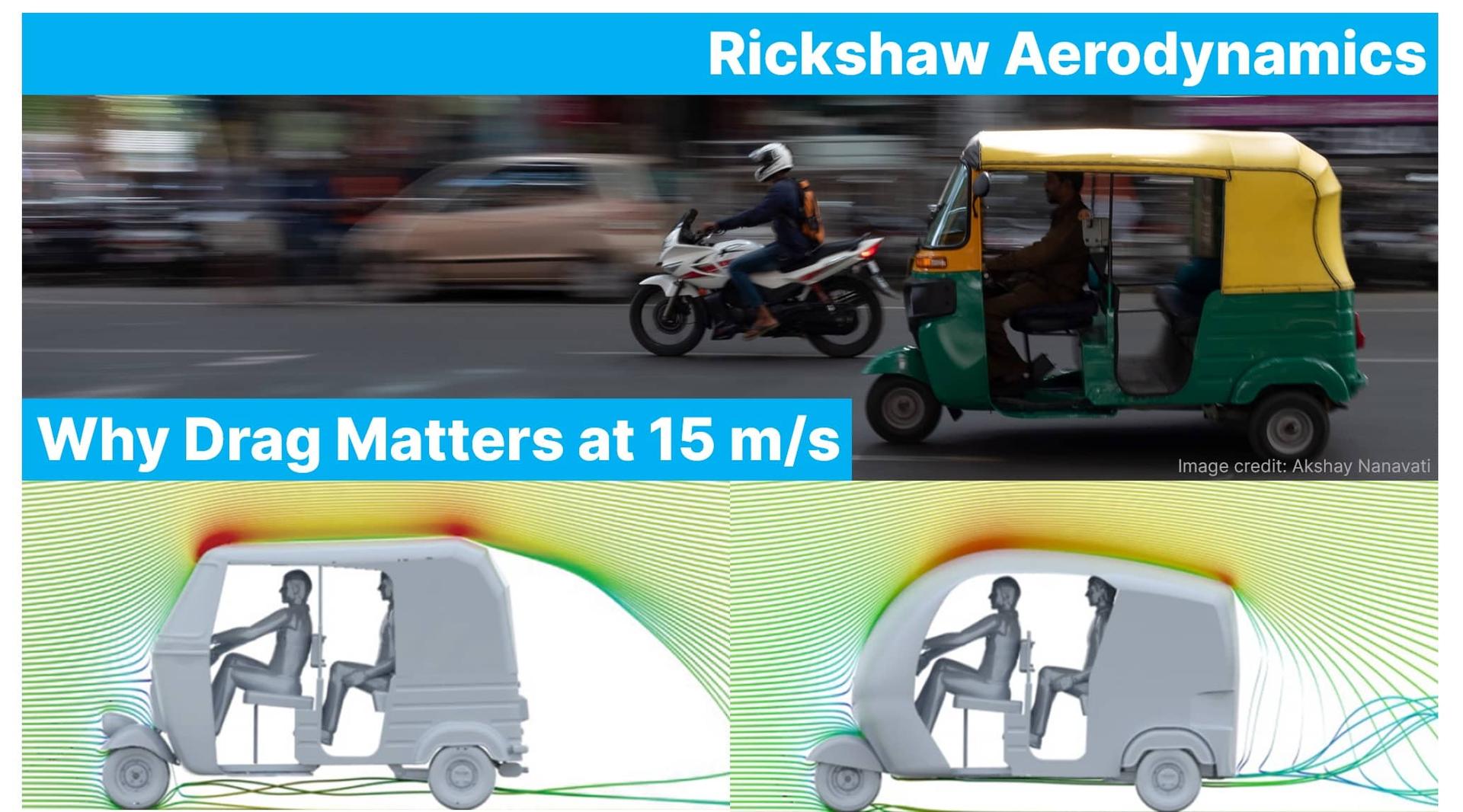 Sheetalkumar Patil is founder and director of Speed Engineering where they focus on engineering for a wide variety of segments like aerospace, automotive, electronics and so on. In this article though, the speed is much reduced as he takes us through the process of optimizing the aerodynamics of the famous Rickshaw at just 15 m/s.

When people think of aerodynamics, they automatically think of airplanes flying at 800 km/h, rockets blasting into space or race cars lapping the Nürbürgring at insane speeds. But aerodynamics play a role as any object starts to move through the air, no matter how low the speed. And they start to play a significant role, i.e. an impact on fuel consumption & range well above 10%, at much lower speeds than people would expect. In this article, we dive into the details of the Rickshaw, one of the most popular vehicles in India & Sout-East Asia. And we come to the conclusion that much can be gained from improving its aerodynamics!

In fluid mechanics terms, vehicles are bluff bodies travelling very close the ground. A complex three-dimensional flow occurs around the vehicles with flow separation being very common. Such flow is typically analysed and optimized through external aerodynamics studies.

Sports cars, passenger cars and commercial vehicles - all of which move at relatively high speeds - experience significant aerodynamic drag forces which impact performance and increase fuel consumption. For ground vehicles, this is mainly pressure drag; so avoiding or reducing the separation is one of the main objectives of vehicle aerodynamics.

External aerodynamics is also becoming increasingly important in the shift from fossil fuel vehicles to electric vehicles. In the context of electrification of vehicles, the drag force is an important factor to be considered as it impacts the operating costs of the vehicles, sizing of the drive train and the range of the vehicle before recharge. Reducing drag force is important even for relatively slower speed electric vehicles and if not optimized, it can have significant impact on cost and performance. Therefore, design improvements through external aerodynamics simulations of drag resistance using CFD is a necessity for all electric vehicles.

External aerodynamics simulations using CFD though have some constraints, such as:

Here we are presenting a case study to depict how CFD analysis can be used to improve aerodynamics of a relatively slower speed commercial vehicle while overcoming the above constraints.

This case study has been performed on the legacy design of auto rickshaw (3-wheeler). It is mainly used as short distance taxi in India and South Asia. The body design was done in the last century and aerodynamic considerations were not the primary factors back then. If we want to convert such vehicle to an electric one, we need to consider aerodynamics and check how much electric power can be saved and also, if the range can be increased through design improvements to the body shape.

The shape of the 3-wheeler considered for this study is as shown below.

Based on the AirShaper results of the external aerodynamics study on the baseline design, the body shape was revised within the following constraints:

The following changes were made to the baseline design:

The revised design is depicted below.

Both designs were analysed for aerodynamic performance at a vehicle speed of 15 m/s. The drag coefficient of the Rickshaw has dropped form 0.45 to 0.39. This reduces the power required to overcome aerodynamic forces by 17.4 %. This will result in an increase in the range of the vehicle as well.

The aerodynamic plots below, comparing the baseline & revised design, show how various aerodynamic considerations were implemented:

The total project was done in just 50 hours, of which 40% was CFD run time. The rest of the time was spent on geometry modifications, post-processing the data and drawing conclusions & reporting. So, computationally this is not a very expensive analysis.


Running your own CFD Simulation


How to interpret a CFD Simulation