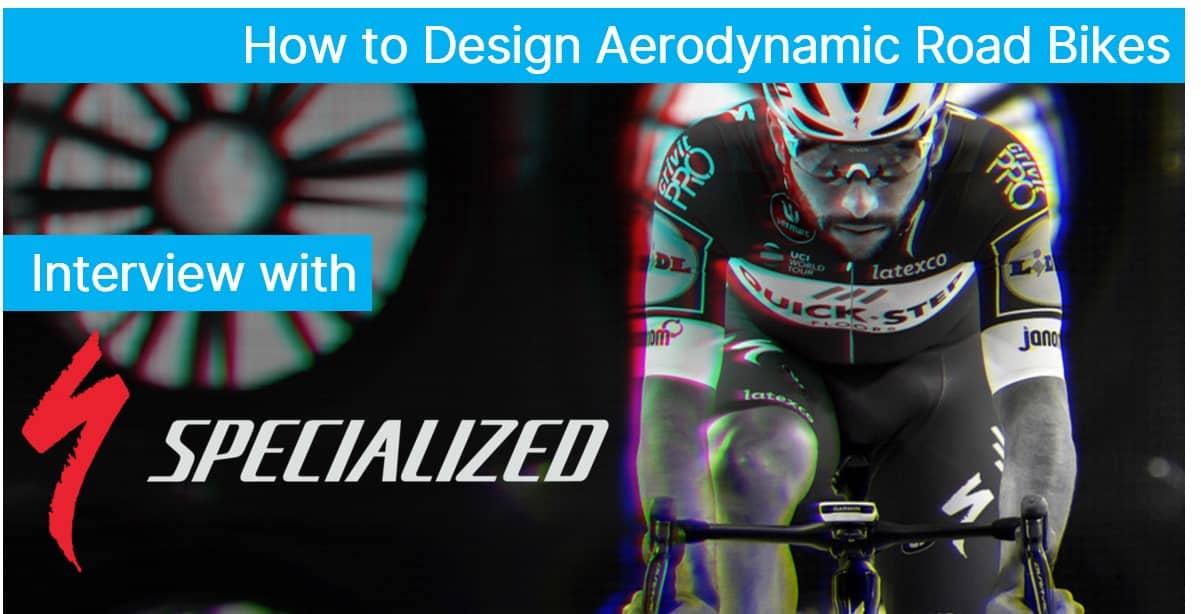 Mio Suzuki, Sr. R&D Engineer and Aerodynamics Lead at Specialized Bicycle Components gives us an extraordinary insight into how aerodynamic concepts in cycling are brought to live. Starting from the very beginning with fundamental research studies in CFD and wind tunnel testing all the way to optimizing the bike towards a design fit for production.

Who pioneered bike aerodynamics? The race that comes into mind when thinking about the first stepts into cycling aerodynamics was the iconic victory of Greg LeMond at the 1989 Tour de France’s last time trial. Unusual for that time, he placed his arms at the center on the aerobar extension instead of the handlebars. His ambition to cut down seconds pushed the engineers to further develop the aerodynamics of the bike. The ”new tech” LeMond used was the triathlon style aerobar extension which enabled him to get into a more streamlined position for the time trial than using a grabbing handlebar. I have no doubt that aerodynamics played a decisive role in LeMond’s win. The bike having that characteristic slanted frame which helped LeMond get into that peculiar position which was indeed intended to reduce aerodynamic drag. I’m not sure if there was any bike frame tech that was intentionally embedded into his racing bike at that time, but what I recall heavily was his use of aerobars.

Is the bike itself, contributing perhaps 20% of total drag, really that relevant? Yes. Especially for the professionals who are competing at the highest level of the sport, a variation in drag within that 20% of the whole system is still big. I am personally in charge of conducting tunnel tests. My main objective always has been to create a meaningful test. Before stepping into the tunnel, I clarify the objectives of the test, so that we can capture the necessary engineering assets which are relevant for the development. Ultimately the question is: can a certain combination of bike, wheel, position… provide a relevant experimental number?

Testing is normally done in several ways. Sometimes bike-only tests (without the rider on top) are used to get a clean number. It is important to realise that the rider is a large bluff body, generating vortices causing vortex-shedding and significant experimental noise. Hence to objectively evaluate if our bike is faster than the competitor bike, it is essential to test the bike only.

More relevant to the rider however is the aerodynamic drag of the full bike-rider combination. To have the rider in the same consistent position, and to allow for proper comparison between tests, we work with Mannequins (dummy models). In the past we had two mannequin positions at Specialized; one for road bike and the other for time trial position. Recently, we added an extra one to reflect differences between male and female bodies.

Besides using mannequins, we perform a lot of athlete testing, at least before COVID-19, with internal as well as professional riders visiting our headquarters to work on their athletic goals.

Tell me about the aerodynamic design cycle in bikes, the use of wind tunnels, CFD analysis and so on. Each manufacturer does it differently. It often starts from the product manager’s specifications for the next bike, which mainly reduces to three pillars; drag, stiffness and weight. I personally like to go hard on CFD from the start, getting numerical drag targets which give me a goal on what to redesign. Then I work with the design engineers, specialists in creating the 3D CAD model. In terms of the workflow, we start with competitor and current model analysis (through CFD and/or wind tunnel testing), where we typically perform at least one wind tunnel at the start of the project to correlate CFD and wind tunnel data.

Once aerodynamics traits and drag reduction requirements are established, we proceed to CFD-based design iterations. These days, using reasonably sized high-performance computing clusters, hundreds of design variations of the initial model can be analyzed in relatively short amount of time. We have partially automated this process by parametrizing CAD models, changing parameters and seeing the effect on drag. With the use of large-scale computing, I have remote access to a cluster set-up with a virtually unlimited number of cores. On these computers, I run about 15 simulations in parallel in a batch and repeat the process as often as I like.

Besides aerodynamics, the role of other physics parameters (weight & stiffness) is very important too. We simultaneously evaluate competing physics/physical objectives, and check if a certain combination of parameters results in the desired bike characteristic. After this, one or two final prototypes are taken to the wind tunnel to select the winning design and until the design freeze. Once this is done, I am out of the game and the project focus shifts to the manufacturing, where industrial designers turn the prototype into a ready-for-production design. Project design engineers then work with vendors and teams that executes the manufacturing processes.

What’s in store for the future? Are we already on the flat part of the improvement curve? Not at all! There is still room for improvement. Perhaps not the most drastic changes, but these will likely be driven by an increased understanding of the fundamentals of the aerodynamics. In the past, cycling/bicycle aerodynamic drag heavily focused on manipulating the frontal area (projected area, or the “A” in CdA). But simply reducing the frontal area by making frame tubes skinnier has its limit and will have the consequence on frame structure and weight, as well as influencing the ride quality.

So while paying attention to keeping the frontal area is important, understanding how the frame shape, and bike + rider influences a variation in Cd also becomes the key to create a performance bike that satisfies multiple physical attributes in play for the overall ride experience and rider performance. To do that, my hope is that the community treats aerodynamics as a science and not just only as trendy words. I am hopeful that this renewed industry focus could see a more serious and formal attitude towards the physics of aerodynamics.

Do you see business moving towards customization of aerodynamics and bike elements based on body features? Each athlete’s body features, flexibility and mobility deserve a high degree of attention in time trial. These natural individual differences show up when athletes try to get into time trial position, particularly around the neck and shoulders and in the thoracic spine curvature. Rather than offering a cookie-cutter approach, tailoring the goods and services to an individual athlete to take advantage of their natural body build makes sense.

Practice like that has been done for many years among the sponsored, professionally competing cyclists, but I think the idea of offering such services is becoming more common in the amateur cycling scene.

What is the next domain where aerodynamics can be improved? I get that question asked very often, but I am selfishly going to keep the secrets to myself! Computational tools available to the analysis engineers improved dramatically over the decade. Predictive engineering goes on so much beyond trying out simple 2D shapes. DOE, optimization and even statistical/data-driven methods such as machine learning/deep learning can be applied to define design spaces and frame shapes. Since computational hardware is no longer a barrier, adopting the right analysis methods that return large volumes of ride scenarios and relevant results in a timely manner may be the next frontier. There are various ways to approach CFD and experimental aerodynamics that simultaneously explore ride dynamics and frame structure/weight design spaces. I think it’ll be interesting to keep our eyes on how the future innovation practice evolves.

How are aerodynamics in teams limited by the regulations of competition? To be eligible to compete in UCI (Union Cycliste Internationale) races, such bickes must comply with UCI’s bicycle design guidelines. To give you an example, the airfoil aspect ratio cannot be more than 3/1. I personally don’t find the regulations very limiting, there are still rooms for creativity to blossom. On the other hand I feel that reguations on items like helmets can be bit more complex for a perfectly logical reson; they must also comply with safety certification standards. Also the considerations for ventilation comfort are relatively high too.

How many aerodynamicists work on a single project at Specialized? Currently, on the product design, I’m the only one running CFD analysis at Specialized. When it comes to tunnel testing, I have my teammates who can lend hands for successfully completing the tests. It’s always nice to have multiple set of eyes paying attention to every detail during the test. My impression is that most other manufactures also have a similar set up as well.

Towards the end, and interesting debate arose: how standardising testing across all manufacturers could be done. Mio asked us about our thoughts into this topic too.

Mio – I often hear from customers and journalists about them not able to trust the drag numbers and claims stated by the bike manufacturers because they all claim the title of “world’s most aerodynamic bike”. While I somewhat sympathize with this complaint, to someone like me and knowing that there are other engineers who exercise their best professional practice in conducting these tests and reporting the results, it also came as a bit of a surprise.

What can manufacturers do to earn the customers’ trust?

Our response - One of the first things to do would be to standardise the testing procedure, which would be similar to what you are doing internally at Specialized. Selecting two or three mannequins, specifying saddle and steering position, frame dimensions and so. Then run them through standardised wind tunnel tests, at a specified speed, yaw angle and so on in order to obtain comparable data. But there is no such standardised procedure yet. Competition teams may do this internally and confidentially by getting competitor bikes and testing them behind closed doors. Precisely behind those doors, every manufacturer has its own opinion on the ideal riding position and the most relevant yaw angle.

The truth is that “the most aerodynamic bike” is different for each race and each rider, so it is difficult to make a global claim like that. In any case, just as we can see in the automotive industry, which is a very mature business, there could be public rankings that fairly compare all designs according to industry standards (although even here we see that manufacturers pull all kinds of tricks to get the official values down). For the bike industry, a crucial question is who would be hosting such comparisons and tests? By all means it must be an independent institution, possibly the UCI, or maybe even an independent simulation service like AirShaper or an independent wind tunnel institute.

Mio - Ranking based on relative difference might be the best way to go. I have used different tunnels in the US, and I am aware that each tunnel is constructed differently, having different data acquisition instruments. Each tunnel is unique. Although these tunnels have good precisions within their measurements, trying to compare the results in absolute magnitude across different facilities presents challenges. This is because instrumentation as well as post-processing methods can differ among different facilities. Despite this, in general, ranking of the products and trends of drag vs. yaw tend to agree when testing the same object under the same protocol.


From 3D scan to Aerodynamic Simulation of a cyclist


Running your own simulation