Looking beyond the Tesla Semi - The Betterflow Future Truck 2032 Concept 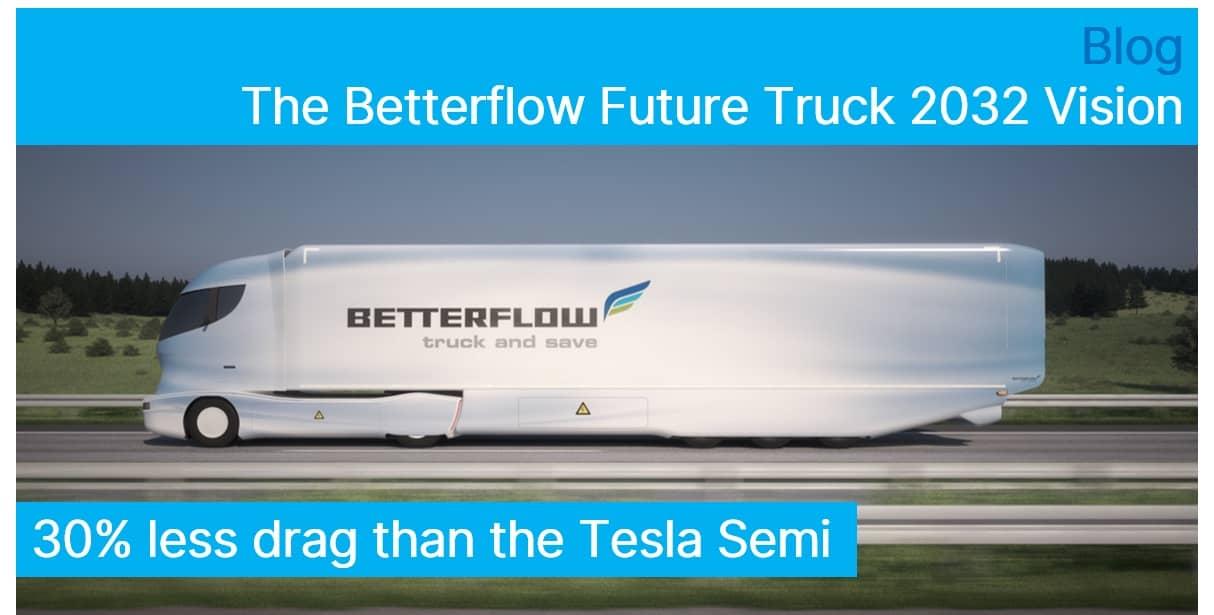 Dr. Rainer Buffo is the CEO of "Betterflow GmbH", a company specialized in optimizing the aerodynamics of trucks and trailers to reduce fuel / battery energy consumption. Next to their existing range of fuel-cutting add-ons for trucks, they also work on & lobby for more drastic changes to the shape of future trucks - Enjoy the blog post!

About the Tesla Semi

Heavy-duty trucking is a conservative business: every minute and every dollar/euro counts and margins are low. There's definitely interest to reduce fuel or battery energy consumption, as this directly impacts the profitability of trucking companies. Our starting point today is the existing truck-trailer layout which is optimized around businesses, daily operations and regulations but suffers from an unattended aerodynamic health condition. But with the right treatment using effective add-ons and adjustments there is room for innovation and efficiency leaps. And there’s so much more to achieve!

So we were thrilled to see Tesla shocking the industry by presenting an extremely streamlined truck. It opened up the minds of people to rethink what could be possible and a drag coefficient of 0.35 is an impressive achievement.

One thing Tesla didn't really touch was the trailer (which makes sense, as they focused on electrifying the truck). Yes, the truck was optimized to deliver clean airflow to the trailer it is pulling, but from there on, it is back to usual business with a boxy trailer.

Making the Truck & Trailer play together

We work on optimizing existing trailers every day, as much as we can within the newest regulations: we add flaps at the rear to help close the wake, we optimize the top to better accept incoming air from the truck and we "clean up" the flow underneath the truck. And that's where it gets interesting.

In parallel, we're designing the ultimate aero-truck to make a mark on the (road)map in terms of what is realistically possible for truck-trailer aerodynamics in the future. It's called the "2032 Future Truck". When you make the truck & trailer work together you can really go far beyond the 0.35 Cd value of the Tesla Semi!

One key aspect of optimizing the airflow of a truck is to look at how the airflow moves underneath. The traditional train of thought (pun intended) is to shield the sides of the trailer to prevent flow from moving in and out from underneath the trailer / hitting the tires. That makes sense, as the truck has already pushed that air out of the way and the trailer can hide in this wake. But that means there is a "pocket of air" below the trailer being dragged along, virtually increasing the "frontal area" or "cross-section".

In our Future 2032 truck, we have completely redesigned the truck to allow for air go dive underneath the cabin, between the wheels. This channel is then continued underneath the trailer, where the air can flow freely between the left & right wheels (which are shielded to reduce drag).

Together with front & rear guiding vanes, we can create a high-speed flow all the way from the front of the truck to the rear of the trailer. Comparing to an indicative 3D model of the Tesla Semi, first CFD (computational fluid dynamics) estimates indicate that the drag coefficient is almost 30% lower than the Tesla Semi. Some might call this Black Magic! We think it's the next go-to treatment for the airflow around trucks.

From Concept to Reality

We realize this concept cannot be made within existing road transport standards & habits. And maybe it will not look exactly like this in 2032. But we are working hard on creating awareness on its potential in different sector groups and regulatory organizations to pave the way for the necessary changes. Betterflow wants to make a substantial difference in terms of fuel emissions and battery energy consumption!


Run your own Simulation