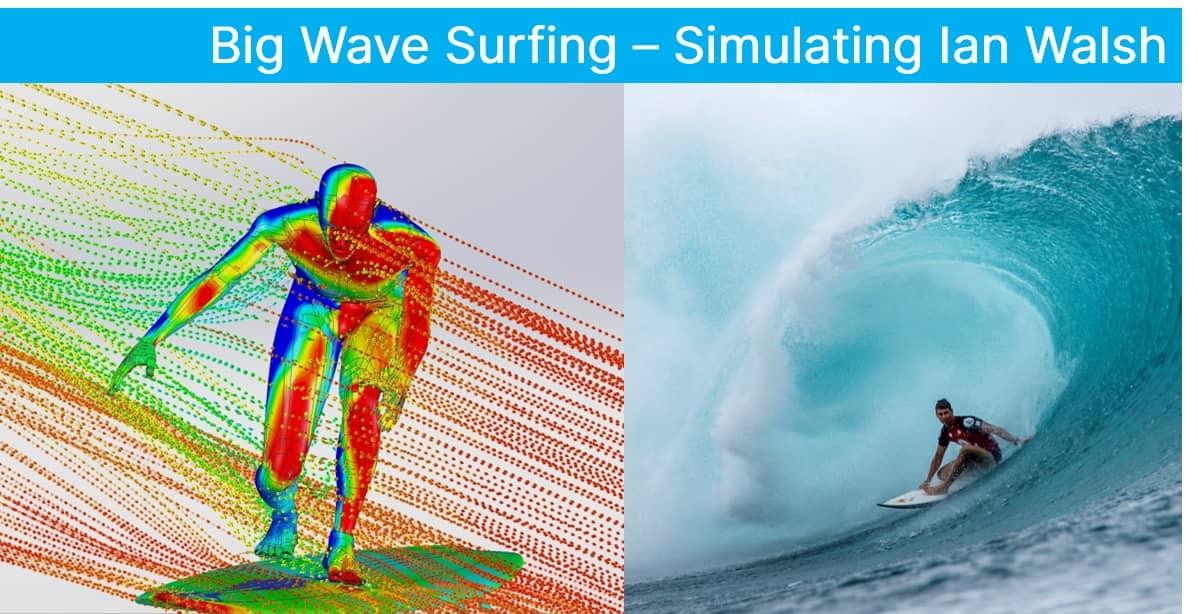 Sometimes the limit to aerodynamic applications is only set by imagination. This time we had the pleasure of speaking to Jay White, Chief Technical Officer at Falcon Pursuit. We have focused on just one of the many fascinating and abstract projects they do in collaboration with the Red Bull athlete performance center.

How does this kind of project come together? Surfing came up because as part of the Red Bull performance group, we had just delivered our advanced avatar creation technology, the AVA kiosk to Santa Monica. In these buildings, things are going on that have less to do with delivering drinks, and more about athlete performance groups, e-sports and much more. We were scheduled to work with the triathlete Cameron Wurf and the surf team was also in the building, Ian Walsh being one of them. So, we put Ian into the Kiosk and scanned him in 3D, with and without his wet suit. Asked a few questions about what surfboard he was on currently, to get some basic data to model it.

We found some videos on Ian’s epic big wave ride achieved some months before. The challenge came when we had to model in 3D an ocean wave, which is incredibly dynamic, large and it interacts with the environment in subtle ways. That was the hard part of the story. Once finished, it was a matter of placing Ian’s avatar into the virtual model using 2D broadcast video, snapping his position into the surfboard, and modelling the wave + athlete + surfboard in dynamic 3D space.

Talk us through the transition from 2D footage to 3D model. The process of going from 2D to 3D uses an avatar. The avatar represents the way the athlete looks in space, same shape and even shirt colour. To do so, we “net” the athlete, taking off all the exterior baggy clothing to obtain a skin-tight surface. For a surfer that is no problem as it is basically how he performs naturally when surfing. Having done that, we ran it through our AI ARE (Avatar Rendering Engine), which takes that surface scan and clads it to an avatar adding joints, muscles, eye blink, moveable mouth etc.

Traditionally, this is a multi-day process. In movies for instance, they perform motion cpaturing using mounted sensor balls in 3D space, they hook it to a skeletal structure which in turn gets connected to an animated figure. It is a very long, tedious, high-end & precise engineering process that takes days to complete. Then there are literally hundreds of animators to converting 3D data from the actual actor moving around into a rigged character. All this cannot be done with the surfer since he is out on the wave, and such post-processing effort would be too expensive / slow.

Instead, what the AI ARE engine does is to track Ian in the 2D video footage and matches the 3D avatar to mimic his position. This allows us to model Ian in 3D space based on a single scene. Finer motion and details such as the position of head, fingers, foot and any accessories, is obtained from successive AI solves. Playing with the likelihood of certain positions, the AI does a secondary solve on that to locate such finer details on the avatar.

The next step is to model the wave itself. For this, we used use Optical Flow. Here's how it works: Say, for example, I take a picture of a baseball in flight with a normal camera, generally my frame rate is small enough that the baseball blurs only a bit. By taking an image at a high enough shutter speed, it will be super-sharp. By quantifying how much (parts of) images blur (one-thirtieth of a second, one sixtieth of a second image exposure time), you can tell the direction and velocity of that object. It allows us to accurately calculate the velocity for different parts of the wave front. Hence now having both the wave and Ian on a frame, we can calculate aerodynamic drag, hydrodynamic drag and more, based on parameters such as Ian’s velocity, wave velocity, salt content of the wave, air moving past him etc (note: this process has been patented under US patents 9,797,802 and 10,648,883).

I imagine you can quantify lateral forces on the fins, drag coefficients… but how does this translate to actual improvements for the athlete? Skilled athletes understand how to look at and interpret their video footage, whether it’s a baseball swing or basketball shot. Taking the example of a gymnast, she goes running down the runway, hits the vault and does a flip. When we have 5 or so videos of successive vaults, we start evaluating and identify which ones were the best.

Adding the 2D to 3D analytics tells us that for the good vault, the hip rotation was 120 degs/s, shoulder rotation was 170 degs/s, centre of gravity and how far the foot hit from the vault when landing. Now having all these facts, we can interpret how shoulders over-rotated, hips under-rotated, and her CG was way far forward. Going back and forth through each simulation, the coach will understand what caused a successful event.

Now back to surfing, Ian coming across the wave front. His coach points out that in the successful manoeuvre where the wave did not crash upon him, his position was higher on the wave, water was moving a little faster and hence he was moving faster.

By positioning Ian 6 inches up in the wave, he will carry more speed. Evidence suggesting this might be an air current or how the air curves over the top. This software allows us to see where the air is moving in a favourable direction, pushing the surfer. Thus, we adjust the board angle to be in this position in order to have higher probability of a more successful event.

How do you go about the interaction between hydrodynamics and aerodynamics? With the more complex simulations, we model both simuataneously. Taking a “bottom turn” as example. When coming down, to go up again you could do a rail slide, a slip, or a flip manoeuvre. For this, the fins need to be in contact with the water, but with cavitation, the board will slip to the side instead of edging. Hence taking that snapshot and running a simulation, we may see that in the last one-sixtieth of a second, the fin went into the water to three-quarters of the way.

Cavitation happens when the fin reaches a certain angle relative to the water stall angle, that instead of slicing though it, bubbles generate in the trailing edge. Hence not contacting water anymore and loosing control.

From your simulations, what board settings can you change to increase performance? Solutions to this cavitation problem where your board is sliding instead of carving across the wave are relatively simple: change the shape of the fin, its length, position and so on. Cavitation is a relatively difficult phenomenon to show and explain to any athlete, but by using scenes and tangible data, you can show how the flow varies from fin A to fin B, highlighting the loss of adhesion with the water.

Hydrodynamics sound very esoteric, normally board shapers come with their magic wand and say: “This is a perfect board for Ian.” After Ian gives it a try, there seems to be a problem with the edge-rails when cutting into the wave. Red Bull Performance Group then comes and demonstrates with a simulation animation that the board is not well suited for him, arguing that it generates too much drag, requires greater flotation and so on. The tough part is that athletes are in love with their equipment; favourite board, position and so on. Asking to change something is monumental. Hence throwing a bit of science behind it will help the athlete trust the path to an increase in performance.

Don't be a drag