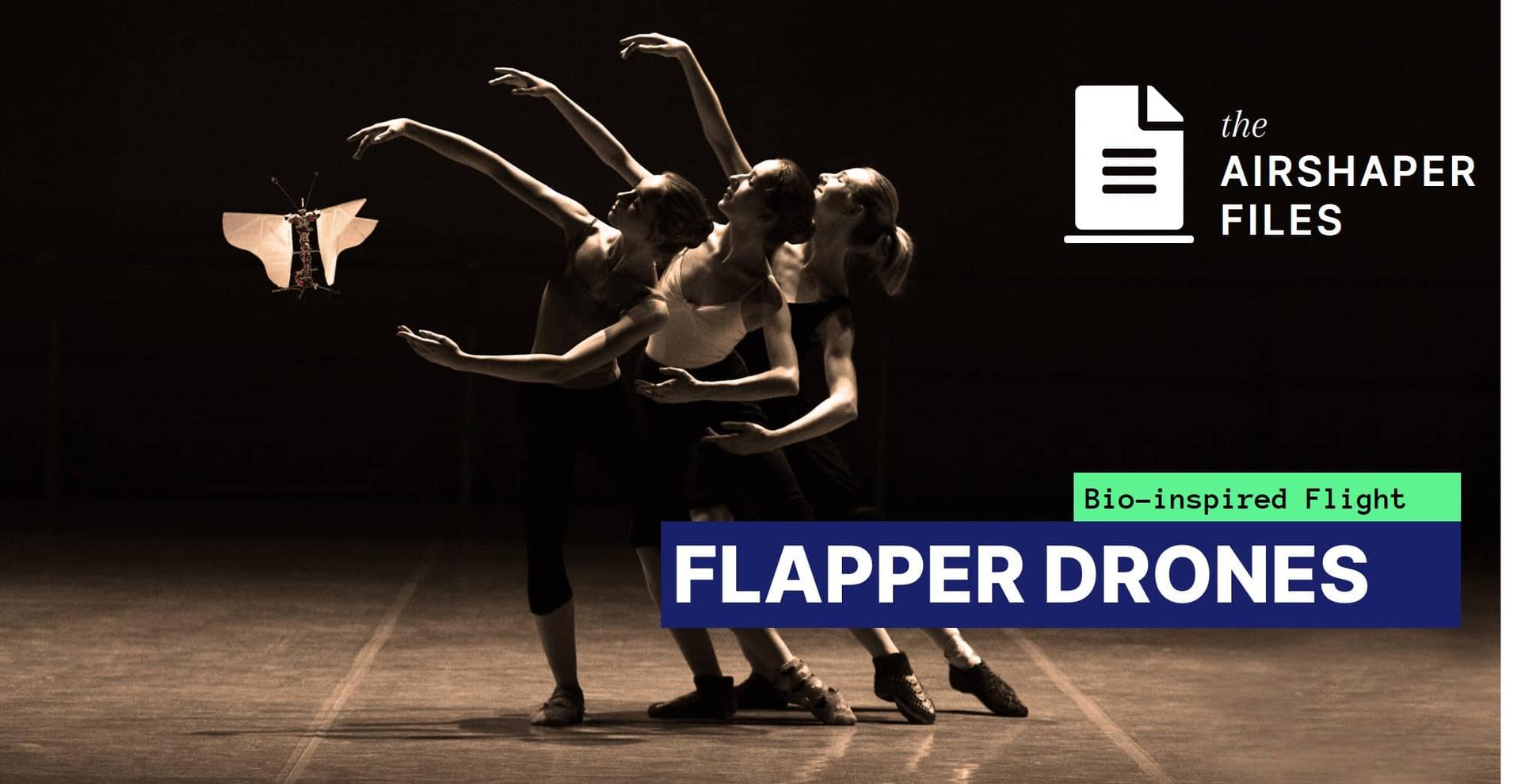 Matěj Karásek is co-founder and CEO of Flapper Drones. He's a mechanical engineer with a PhD in Engineering Sciences. He has 10 years of experience in development and research of flapping wing aerial vehicles at the Delft University of Technology and at the Université Libre de Bruxelles.

What is a flapper drone?

Flapper is a robotic bird that flies by flapping its wings. It can fly just like a drone: it can hover in place, fly forward or sideways and climb and descend vertically. But, unlike conventional drones, it does not have any propellers. Instead, it flaps its wings back and forth, and adjusts this motion further in order to maneuver, like a hummingbird.

The inspiration comes, obviously, from nature and more specifically from hummingbirds and flying insects such as moths and flies. While all the flying animals flap their wings in order to propel themselves through air, it is only these smaller ones that are capable of prolonged hovering. Hummingbirds are the only birds capable of sustained stationary flight and this is due to scaling – for larger birds this simply requires too much power.

The main benefits of Flappers are their inherent safety, agility and their better societal acceptance, stemming from their natural appearance and sound.

The propellers of conventional drones are fast spinning, blade-thin objects that need to be protected. Interaction with a propeller in flight is not only dangerous for humans (and their hands or faces) but any impact will also slow the propeller down, which can lead to an abrupt loss of stability and crash. Moreover, propellers are the source of the characteristic, high-pitched buzzing noise typical for drones.

Flappers fly with wings that are soft and move back and forth. In case of a mid-air collision, the wings bounce gently off of objects, causing no harm while the Flapper maintains stable flight. The flapping wings also produce a lower-frequency humming sound that is less disturbing. And finally, since flapping flight works better at smaller scales, the Flappers are lightweight with a considerable wing area that slows the fall in case of a power failure.

Efficiency remains an open research question, as flapping wing designs are still very young, and we are far from reaching an optimal match between motor, transmission, wing motion and wing shape. Nevertheless, our 100-g Flapper can hover for about 6 minutes with its standard battery (300 mAh, 18 grams). Maximum power efficiency is achieved in forward flight, where we can gain additional 10-20% of flight time.

If we use all the payload capacity for just the battery, the longest hovering flight we achieved with a 950 mAh battery was nearly 18 minutes long, which is pretty good for such a lightweight drone. We are certain this can be further improved.

The aerodynamics of a flapping wing are unsteady and so the challenge lies in developing an appropriate model that would capture all the phenomena, including the fluid-structure interactions, i.e. interaction of the aerodynamics and structural dynamics of the flexible wings. In fact, the wings of Flappers also interact with each other as they “clap” and “peel” to further improve the power efficiency, which adds further complexity to the modeling problem.

But, for the flapping-flight, these inherently complex aerodynamics are actually beneficial. The most prominent flow feature is a leading-edge vortex, a tornado-like structure that remains attached to the flapping wing throughout the entire stroke, increasing its lift coefficient. The interaction of the wing with the vortices shed in the previous stroke can help recover some of their energy, improving further the overall power efficiency.

Because of these complexities, we rely mostly on experiments and (systematic) trial and error approach. Although the aerodynamic forces keep changing substantially throughout each wing stroke, we can evaluate the performance of a particular wing using only the flap-averaged forces. This is in particular true for smaller fliers, where the flapping frequency is high and well above the bandwidth of the fliers’ body dynamics. And these averaged forces we can measure using force balances, as long as care is taken as to how the data is filtered and averaged.

However, further insights can be gained through flow visualizations. During my research at the TU Delft we were able to develop methods that enabled recording the 3D flow structures in flight. To achieve that, we used tiny helium-filled soap bubbles illuminated with lasers and recorded with multiple high-speed cameras simultaneously from different angles. The recorded data can also be used to develop better aerodynamic data in the future, but for now, we need to also rely on intuition and gut-feeling.

Looking into nature we see a clear trend. The smaller (and lighter) the animal, the faster its wings need to flap and the easier it is to hover. For large animals, hovering flight is too power-demanding, and they can sustain it only briefly e.g. when perching. Currently, we can build Flappers as small as 25 centimeters /30 grams, to go even smaller we are mostly limited by the available actuator technology, but the physics of flying would be even more favorable there. For carrying large payloads on long distances, we should stick to gliding flight, which is what large birds master incredibly well. However, if hovering flight and also agility are important, this gets better at small scales. Our 100-gram Flappers can carry an extra payload of 25 grams, so carrying additional sensors or a vision system for higher autonomy is certainly possible. When it comes to noise, higher frequencies can be more irritating, think of a mosquito flapping its wings up to 1000 times per second. This is also the frequency range where propellers of conventional drones operate, just the sound pressure is higher as it scales with weight. The lower frequency humming sound of hummingbirds, and Flappers, is much more pleasant for a human ear. Nevertheless, for stealth operation, stopping the wings from flapping and switching to gliding flight is the best option, and here we can also learn from nature: night predators such as owls evolved their wings to be virtually silent.

We started Flapper Drones with the idea of creating a new type of drone show. A swarm of robotic birds flying in choreography with music at festivals, or robotic fairies flying around people in theme parks.

However, with the COVID-19 pandemic we—hopefully just temporarily—changed our focus to consumers. We are working on a DIY kit that people can assemble with simple tools, before taking the assembled Flapper for a flight. This way, the users can learn about the inner-working of the Flapper as well as about bio-inspired flight in general in a very hands-on way. Ultimately, we believe flapping-wing robots will become a new class of drones, especially suitable for indoor applications where you need a safe and un-intrusive robot that can fly near people and that is resilient to minor collisions. Next to the entertainment applications, we see opportunities in stock monitoring in warehouses, in greenhouses to monitor—and later possibly even pollinate—plants, but also applications like a personal flying guide in a museum or a store.

While we employ lightweight materials such as carbon fibre composites and apply techniques such as 3D printing, the reason why we see the first hover-capable flapping wing fliers only now are the technological advances made in the past 20 years, driven by mobile technology. We now have high-energy-density batteries, and powerful yet lightweight and energy-efficient micro-computers and sensors. Especially the miniature and lightweight MEMS IMU sensors, which inform your smartphone when to flip your screen, are essential. Hovering flapping flight is unstable and requires active stabilization that estimates the attitude — the orientation in space — using these sensors. The on-board computer then sends signals to the actuators, at rates well over 100 times per second, which keep adjusting the motion and geometry of the wings. These actuators need to be fast enough to keep the Flapper balanced, and it is what currently limits us from making these Flappers even smaller. Despite the recent developments in drones which brought lighter and more powerful DC motors, for now, their power efficiency drops at small scales making the achievable flight times short and impractical below wingspans of about 15 centimeters.

We are moving towards a roboticized society and drones will eventually become part of our environments. We would like to show that drones do not need to be scary and annoying. By employing bio-inspiration, we want to introduce a new class of flying robots that are useful and, at the same time, beautiful and fun to watch, just like natural fliers! 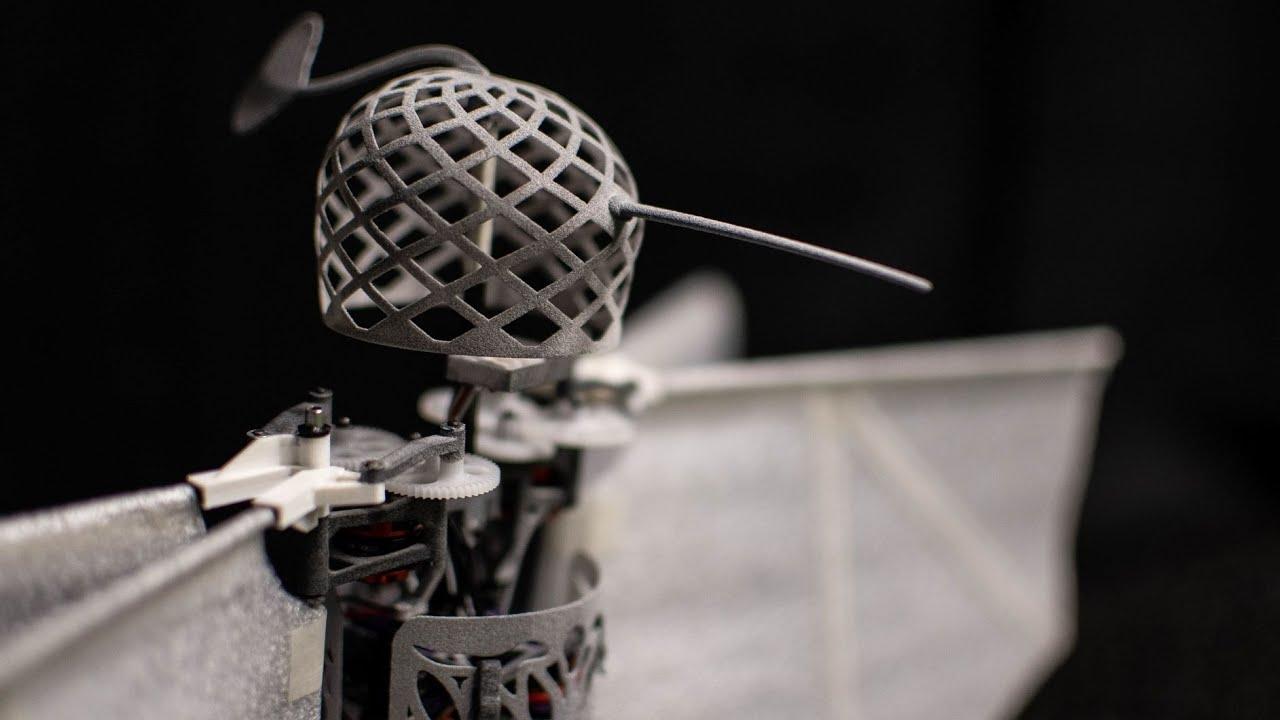