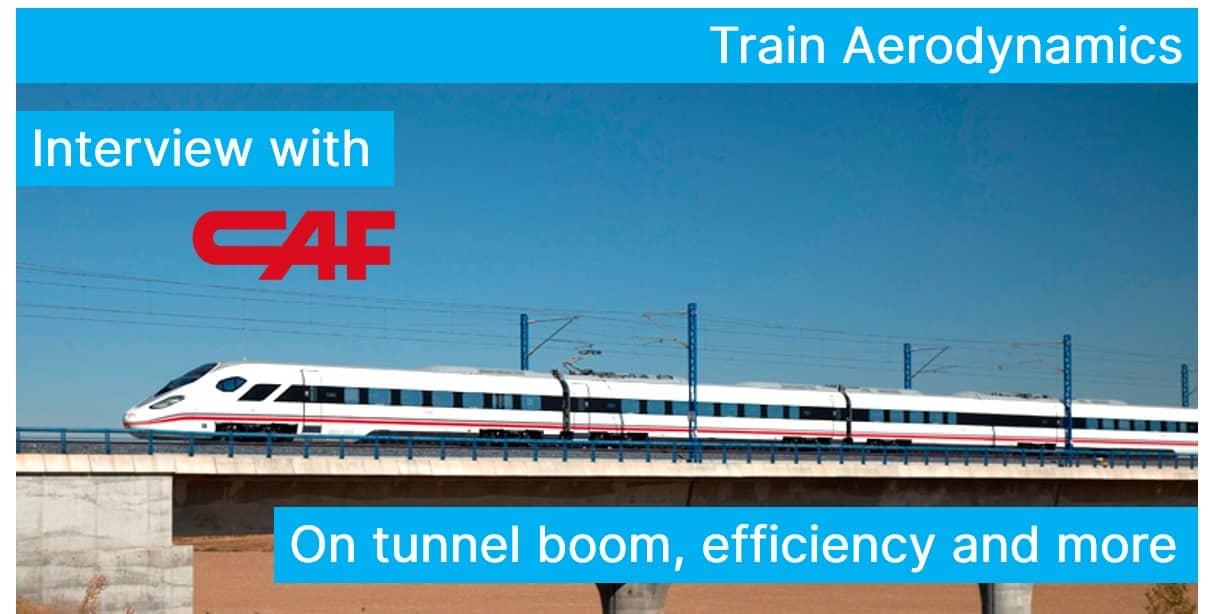 Train aerodynamics is a fascinating, yet sometimes forgotten world, particularly with the increasing number of high-speed trains that are currently in use worldwide. We had the pleasure to interview two experts working at CAF, a rail systems company born in the Basque Country (Spain) which designs, manufactures and maintains rail systems around the globe. Joseba Murua, head of the dynamics and rolling area within the R&D department, leads a team focused on analysing suspension forces and vehicle–track interaction. On the other hand, Mikel Iraeta works in the fluids mechanics department, predicting the external aerodynamic phenomena related to high-speed trains.

The role of train aerodynamics

What are the main focus points when working on the aerodynamics of trains?

(Mikel) Acknowledging that trains are a means of transport used daily by millions of people, passenger safety is a top priority. My team ensures that European guidelines are followed, such as the Council Directives on interoperability of the trans-European high-speed and conventional rail systems and the Technical Specifications for Interoperability (TSIs). Safety is determined by the stability of the train as well as its functioning in case of failure or accident. Although train aerodynamics varies greatly among the different types of vehicle to be analysed and is highly dependent on operating conditions such as speed range, exposure to crosswinds, altitude and tunnel operation, there is a common focus point: efficiency. There is an increasing demand from the European Union towards designing long-term sustainable vehicles which maximise energetical performance. This implies an improved vehicle design based on experience, collected data and simulations (predicting drag, head pressure waves and crosswind stability, among others) that shall lead to a better train performance and tends to avoid the overestimations of components. (Joseba) The increased efficiency requirements have a crucial impact on the vehicle system dynamics, which we analyse by evaluating stability behaviour, curve negotiation, rolling physics and train-infrastructure interaction, among others. In particular, the response to cross winds has to be considered.

What is the importance of crosswind and how does it affect train dynamics and safety?

(Mikel) The stability against crosswind is a technical compatibility problem that can be described by three aspects:

This means that equivalent wind conditions (in terms of wind speed and angle of attack) will not necessarily have the same effect on all trains. For example, the resulting wind force acting on a vehicle running over a 6 m high embankment will be different from the resulting force acting on a vehicle running on a flat ground for the same wind conditions. The role of the train manufacturers is to determine the wind speed the most sensitive car of the unit is able to withstand for some given conditions. At European level this is carried out according to the EN14067-6:2018 which is the normative reference for this purpose and is applicable for vehicles running above 140 km/h. The methodology described in the standard implies:

As a consequence of this process a number of CWCs (Characteristic Wind Curves) are obtained, which show the wind speed the vehicle is able to withstand for certain simulated conditions. However, establishing a safe operation strategy is the responsibility of the infrastructure manager, who is given inputs on train assessment, infrastructure characteristics and path environmental characteristics. The higher the train speed, the more sensitive it is to perturbations and the more likely (although worst case scenario) overturn is.

(Joseba) We must therefore estimate the dynamic response of trains after a velocity perturbation or lateral force, as in aircraft aerodynamics.

The effect of a train passing through a station is also an important aspect. Can you detail how this affects safety of passengers and railway workers?

(Mikel) In order to answer this question, we must first picture a train as a large mass in movement that disturbs the pressure and velocity field around it. The acceptable amount of perturbation is determined, once again, by the TSI and the European Standards (EN) that determine the limit of acceptable pressure variation and wind speeds. The safety distance (measured relatively from the person to the closest surface of the vehicle) is determined by the magnitude of the velocity and pressure induced, which is directly proportional to the size and geometry of the train. Although a more appropriate approach to this question is "what is the velocity at which the train should be approaching", rather than "what is the safe distance at which passengers should be from the train". It is for this reason that the train velocity is always reduced when approaching a station.

What are the main challenges associated with tunnel entrance and exit?

All of these waves cause two phenomena to occur simultaneously. On the one hand, in the vicinity of the train surface, a quasi static flow field can be assumed (even if it is not strictly quasi static, the observed variations may be considered negligible to the overall values). On the other hand, the train will be moving through a complex superposition of waves due to the interaction with the wave fronts. Additonally, the air between the tunnel walls and the train surface will be constrained, as the combination of wall and surface boundary layer growth reduces the effective area in between. The smaller the ratio of tunnel to train cross section, the more significant this effect will be which can have a big impact on the wave fronts and the drag in tunnel.

Does the interaction between these compressible waves cause vibrations in the train?

(Mikel) A vibration may be induced and noticed by passengers at the entrance and exit of the tunnel, but not along the journey inside the tunnel. A small impulse is induced, but is not constant nor periodic, as the impulse is quickly normalised.

How can the “tunnel boom” occur even if trains rarely travel above Mach 1?

(Mikel) When the front wave reaches the end of the tunnel, the energy transmitted to the outside is propagated in a way that can produce a sonic boom. After all, we are talking about a large variation in pressure within a very short timescale and this can be manifested in an audible manner known as tunnel boom. This potential boom would not be perceived by the passengers, as the pressure waves are propagating much faster than train speed. It would only be heard by someone standing outside the tunnel, which is why special consideration must be given to this effect if people live in the vicinity of a high-speed train tunnel. Moreover, it’s a complex phenomenon, difficult to predict as it doesn’t occur in all trains nor tunnels, only within specific characteristics and speed ranges.

Is the induced pressure on the windows significant enough to be considered?

(Mikel) The pressure inside the tunnel is limited by regulations to ensure that windows do not burst under pressure. (Joseba) Both the pressure and velocity inside tunnels are estimated using our own application, which was developed between CAF and the Universidad Politécnica de Madrid. A full CFD analysis is not required in this case and therefore a computationally less costly application can be used. (Mikel) The pressure experienced by the surfaces is determined so that manufacturers can design the windows and doors accordingly. Although window burst due to pressure is not very worrying, special attention must be taken when considering the scenario of debris impact that has a higher probability of bursting a window. This would induce a great pressure variation that could be harmful to passengers, causing ear damage. Once again, the maximum pressure variation acceptable is set by safety standards.

What is the effect of the pantograph on the aerodynamics of the train?

(Mikel) Pantograph effect is only considerable at high speeds, where it can cause not only aero acoustic issues, but also propagate waves in the catenary. Moreover, it is important to understand that the pantograph is a contact between a metallic thread and a rubbing band. It is this contact that provides the energy supply to the train and therefore, it should not be interrupted. The contact must be constant and stable, which is difficulted in the presence of oscillatory forces that may indeed be aerodynamic forces but can also be induced by mechanical movements. To ensure stability, dynamic tests are performed to estimate the forces experienced and the number of actuators and dampers required. It is very difficult to simulate, which is why it is mostly based on experimental data.

(Joseba) The aerodynamic effect of the pantograph is quite peculiar, because although it is very local (as it only acts within a small percentage of the train’s surface), it is highly affected by the globality of the train. The boundary layer developed upstream of the pantograph is critical and complex to predict, and the velocity profile seen by the pantograph is very intricate and three-dimensional, particularly acknowledging the disturbances that roof-mounted systems cause on the flow field.

How is the train’s head designed to ensure maximum efficiency?

(Mikel) There isn’t a direct answer, as we need to consider for which parameter is the head optimised for, depending on the vehicle to be designed. It is evident that in trams and subways, the frontal shape is not very important, but as operating velocity increases, the head will have different functions and will affect factors like the wave front and pressure waves strength, stability, drag and crosswind effects, as the geometry can condition the way flow is propagated downstream and its interaction with other train systems. Therefore, an “optimal” design cannot be found such that it minimises all detrimental effects, but a good enough design can be found such that it satisfies all requirements. Usually, past vehicle data is used as reference on which innovative designs are based, which are later validated in railway trials or wind tunnel tests.

I am particularly fascinated by Japanese trains heads, whose lengths can range up to 15 m, far larger than the maximum 6 m commonly designed in Europe. One would be surprised with such design, particularly because the nose cannot host passengers and it is therefore “unused” space which could theoretically minimise the financial benefits of such train. But it is because of the bullet trains operating speeds of over 300 km/h that these noses are needed to avoid tunnel booms. They ensure that the transition of free area to tunnel restriction is more gradual, such that the pressure waves act within a longer timescale, progressive, alleviating this phenomenon and attenuating the sonic boom effect.

An aeronautics point of view

(Joseba) Having an aeronautics background, it is interesting to present an analogy and a difference between aircraft aerodynamics and train aerodynamics. Starting from the analogy, in both cases their design is highly limited and determined by safety considerations. At the end of the day, it is human lives that are at risk on both vehicles. It is for this reason that all developments and changes undergo a great quantity of checks and standard compliance before they can be introduced in the market. All aerodynamic analysis and predictions must have solid foundation that can back up the safety of their implementation. With regards to the main difference, an airplane is a lifting body while a train is not, which is why much of the aerodynamic knowledge that was obtained a century ago is not always applicable to the analysis of trains. I particularly believe that the aerodynamical theoretical foundation of trains has not been as widely studied and developed as airplane aerodynamics, which is why we must, more often than not, rely on simulations and empirical data to obtain the knowledge that we require of our vehicle.