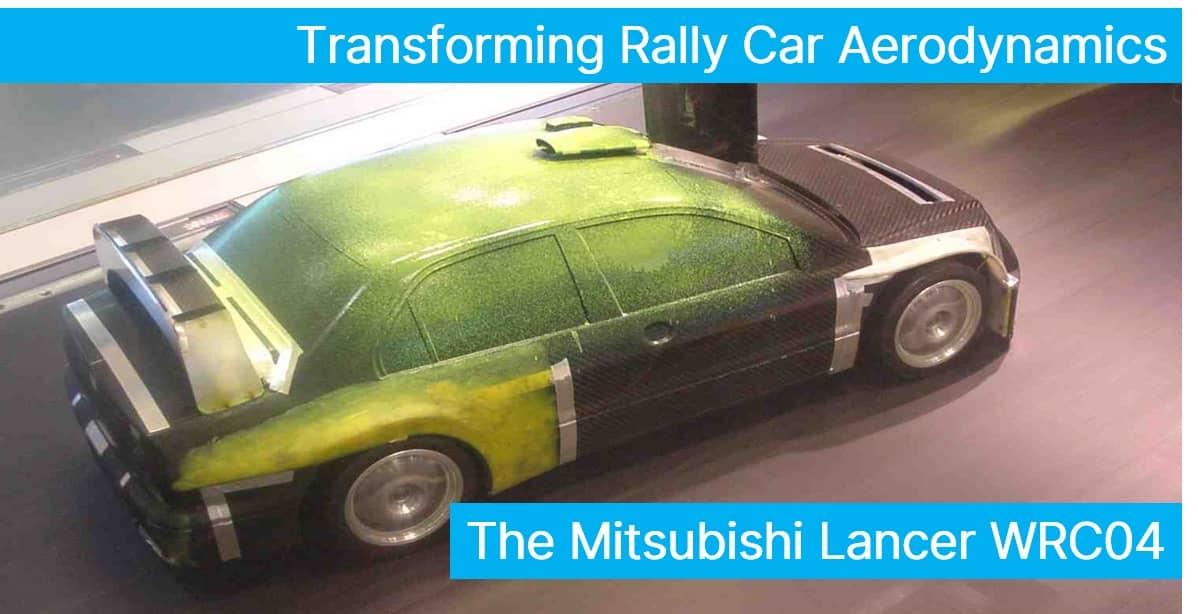 Lluis Vazquez Vilamajo has been a rally fan since 1978, intrigued by aerodynamics since the 80's and runs the website WRC Wings since 2016:

WRCWings is a non-profit initiative created to contribute to the understanding of the aerodynamics of current WRC cars, from rally fans to rally fans. At the same time, it is an opportunity to review the aero and the performance of some of the most iconic cars in WRC history of the last 60 years. But it also intends to recognize the effort, time and resources of so many people, teams and manufacturers to improve the aero and performance of those wonderful cars.

The last evolution of the successful Mitsubishi Lancer to take part in the World Rally Championship (named as WRC04 and WRC05) included one of the most developed aerodynamic designs of the moment. We went in for a close review of its aero design and performance, together with the Ralliart Chief Engineer Roger Estrada and one of the official drivers of the team in 2004, Kristian Sohlberg. They both kindly accepted to answer our questions about the car.

The design process of the WRC04 started in early 2003, and aerodynamics was one of the areas in which most efforts were devoted. In order to know first-hand details about the aero design, we contacted Roger Estrada, who gently accepted to share with us many details of the design process. Estrada (ex-Seat Sport) joined Ralliart in 2002, as a Race and Development Engineer. He was appointed Principal Rally Engineer in 2004and Chief Engineer from 2005 to 2007. Estrada explained to us that "the aerodynamic development was carried out in the wind tunnel of Lola (a renowned 50%-scale moving ground plane wind tunnel where wind speeds of up to 230 km/h can be reached). We did not have any aero engineer in the team, so we took advantage of the vast expertise in aerodynamics of the Lola team, led by the talented Guillaume Cattelani (ex-Peugeot). We gave them our targets for the car and they did the design, based on their broad experience. They prepared a very detailed (1:3) scale model, with which they tested many different evolutions, especially rear wings and bonnets. They performed measurements with the car in frontal as well as sideways position until they reached the final design".

The new design included some original solutions never seen before back then on rally cars. The most visible one was the rear wing. As Estrada explains, "the rear wing gave us a lot of problems since the beginning. Initially, and due to marketing reasons, Mitsubishi wanted the rear wing to be located at the boot lid, as it was in the road car". And indeed, this is one of the first alternatives that were evaluated during the wind tunnel tests, as shown in the picture below.

For this reason, the rear wing was moved forward, close to the rear windshield end. But, as Estrada details, it was not appreciated by everybody: "although moving the wing ahead was allowed by regulations, nobody had tried it before on a sedan-type car like the Lancer. Nobody had understood that it could be located there, but it was completely legal. The FIA did not want us to use it in that position either, but the details of the regulations allowed to do it, and they had to accept it." The rear wing was finally located right behind the rear windshield, on the “upstream” part of the boot.

Even though this was the final configuration to be implemented in the car, other rear wing improvements were evaluated in the wind tunnel. One was the addition of 4 vertical fins to improve the car stability and downforce generation while cornering. The picture below shows the test of this solution during a wind tunnel session, in a test with the moving ground on (see wheels rotating), the car sideways (to fully evaluate the efficiency of the fins) and with traces of yellow paint, probably used to visualize the flow distribution over the car.

The arm located over the windshield was connected to a sensor to measure the load (downforce) generated by the airflow under different conditions. Notice also the fidelity of the scaled model in details like the bonnet design and the engine bay (to allow for a more accurate analysis of internal flows), or the roof scoop and the camera (which was, at the time, located next to the roof scoop on all cars).

Another area to which large efforts were devoted were the fenders. The designers suggested to go for very wide fenders (especially at the car's front), with the “downstream part” being open on both front and rear fenders. Using open fenders had a double advantage: first of all, improved evacuation of the air improves the flow rate through the wheel wells to improve brake cooling. Secondly, when more air is evacuated from the wheel wells, less air accumulates under the car and pressure (lift) is reduced. The result is moregrip.

The picture below show the design of the fender seen from the rear, both on the scaled wind tunnel model and on the real car. The results in the wind tunnel tests validated the design so that the team implemented these solutions into the car.

But, again, this decision created major problems for the team, as Estrada reveals: "Leaving the rear of the fenders open did not make the FIA happy, and we had a lot of problems to homologate it. It was legal, but against the spirit of regulations, according to FIA. They tried to forbid them, based on these regulations, but they could not, as we had simply pushed the regulations to the limit without exceeding them. From 2005, FIA decided to ban open fenders, while now they are allowed again".

The third big area of improvement of the Lancer WRC04 was the front bumper, which had big benefits on the engine and front brakes cooling. "The people at Lola did a great job on the aerodynamics of the front bumper, explains Estrada. The design of the lower part was entirely focused on improving engine cooling. That allowed us to significantly reduce the size of radiators. At the level of the front brakes, cooling was also very good, due to the two big ducts included in the front grille that fed fresh air to the brakes. It was so effective that we never had any cooling issue in the front brakes, in contrast to previous models which all featured brake cooling issues. The design was done with radiators, intercooler and brake cooling in mind". Cooling was also the object of multiple tests in the wind tunnel, evidenced by the great detail of the front bumper and bonnet in the scale model.

The final design of the front bumper included a very large central air inlet for radiator cooling, as well as inlets for the brake cooling (see the pipe inlet on both sides of the radiators in the picture below). Also, on both sides of the front bumper, a NACA duct shape (featuring the Magnetti Marelli sticker inside) was included to smoothen the flow of air to the car sides to reduce drag.

Other distinctive features of the car were the roof scoop, designed with an ellipsoidal shape, and the bonnet air vents, located on both sides of the bonnet and protected with a small lip, in order to minimize the interaction of the hot air removed from the engine bay with the main, external flow.

In conclusion, according to Estrada, "Even though aero modifications were more restricted than in current cars (there was nothing we could do underneath the car, or at the doors), the car in 2004 was very balanced. With this car, we pushed aero to the limits, including solutions that had never been seen before, such as the open fenders, the rear wing location, front fenders design or the front bumper. A lot of effort was devoted to the front of the car. I believe that the Ford Focus 2003 had represented a step ahead in terms of aero, and the Lancer WRC04 was even one step further".

☸ The Man Behind the Wheel

To learn more about the actual performance of the car, especially on the aero side, we contacted the 2004 Mitsubishi Official driver Kristian Sohlberg, who drove the car in five events that year, starting in Sweden.

A compressed development schedule was one of the first problems for the car, Sohlberg mentions: "the car itself had a good chassis, but the team tried to do a miracle with the development work and testing starting so late, that it was never going to work, unfortunately. It would have been a good car with the right amount of testing and a proper development plan."

Over the first events of the season, the cars had to retire frequently due to reliability issues. This is common for a new car, but, in the case of the Lancer WRC04, solving them took much longer, as Sohlberg explains: "We had so many issues with reliability through the whole year that aero was not the main point at the time".

Reliability also affected the aero parts, as Estrada points out: "In terms of aero, the car performed very well, but the problem was the durability of the aero parts, which we lost easily during the stages".

In spite of that, the hottest events showed some of the benefits of the aero design, as Sohlberg reports: "The cooling was working fine even in harder conditions. In Cyprus we had a decent start of the rally but then a sumpguard issue made our life difficult as a quick release pin came loose and we could not attach the guard again. One of the stranger issues we had.... But cooling was working Ok".

The best results the car obtained in the 2004 season were two sixth positions by G.Panizzi/H.Panizzi in Rallye Monte Carlo and by D.Solà/X.Amigó in Rallye Catalunya.

The full story, including the performance of the car in the World Rally Championship, and the aero modifications implemented for 2005, can be found here as part of our series of articles devoted to the aerodynamics of the Mitsubishi Lancer Evo rally car model.


Run your own Simulation