What is vehicle water management? 📢

When was the last time you saw the message ‘clean me’ on the back of a dirty car, truck or lorry? If it’s winter where you are, then it probably wasn’t long ago. But why do some vehicles seem to get dirtier than others? Ok, some owners are not the best at keeping their vehicles clean, but aerodynamics also has a major role to play.

To find out the physics behind vehicle water and dirt management and how simulation can help, we spoke to our two partners Nextflow Software and A2MAC1.

What is vehicle soiling?

Water management is a huge topic. It encompasses everything from designing efficient windscreen wipers to adding aerodynamic devices to control the exterior airflow around a vehicle.

‘It’s essentially all about the interaction of liquid with the exterior surface of the car,’ explains Vincent Keromnes, Dynamic Benchmarking Domain Leader at A2Mac1. ‘This can include rain, water wading and water injection. It’s crucial to monitor where water can get through on a vehicle. If it accumulates in the engine bay, battery pack or on a camera, it can cause major issues.’

It’s not just water that’s a concern though. Dirt, debris, stones and other particles also need to be monitored. Due to the miniature nature of these particles, they are strongly affected by the behaviour of the exterior airflow. Therefore, the aerodynamics need to be designed to minimise these particles either hitting the surface or being ingested in intakes and openings.

‘There are two main sources of soiling,’ highlights Keromnes. ‘Firstly, there is self-soiling which is from the vehicle itself. Wherever there is flow separation, such as on the sideview mirror or at the rear of the car, a wake is generated which causes contamination. Then there is third party soiling which is caused by the interaction of wind, rain and dirt with other obstacles on the road.’

Did you know? The bigger the rear wake of a vehicle, the dirtier it will get. This is why SUV’s get dirtier quicker than other types of cars - because it has a much larger wake. Find out why SUV’s aren’t aerodynamic here.

Why is vehicle water management important?

We all like to see where we’re going when driving, no matter what the conditions are outside. If you’ve ever experienced a faulty windscreen wiper on a motorway, then you’ll have a particular appreciation for this.

‘The most important reason is obviously safety,’ explains Keromnes. ‘Drivers have to have clear visibility through the windscreens, windows and side mirrors, so avoiding dirt deposition on those areas is critical.'

'Also, with more ADAS systems onboard modern vehicles, cameras and LIDAR sensors are very sensitive to dirt. Just a droplet of water on such a tiny camera can seriously affect its performance. This is becoming increasingly important as we move towards more autonomous driving. These types of devices need to stay clean or be easy to clean.’

‘Aesthetics are also a part of it. This is why some manufacturers develop their designs to drive soiling into areas that are not so visible. There’s also the comfort side of things. You can imagine if you’re a truck driver, you don't want to get covered in dirt every time you grab the door handle.'

How do manufacturers manage dirt and water?

Dirt and water management are a key consideration when designing a vehicle’s exterior. Early in the design process, designers analyse the vehicles aerodynamics to control the behaviour of water and dirt to keep key areas of the vehicle clean. However, in areas where this can’t be done, engineers have to develop systems that remove dirt and water.

‘It’s difficult to find an area on a car that stays completely clean. Sometimes your only option is to put a cleaning system in place,’ says Keromnes. ‘That’s why in the 80s and 90s Mercedes cars had a wiper system on the headlamps.'

'As well as wiper systems, carefully controlled spraying techniques can also be used which are efficient and inexpensive. This has become so important that some manufacturers now have specific departments dedicated to developing these spray systems. It's interesting to know how fast a car can get dirty, but it's also interesting to know how fast you can clean it. Both of these can be done through simulation.’

How do you simulate the flow of water and dirt particles?

Accurately modelling the behaviour of a consistent airflow over a vehicle is challenging enough. Add in the effect of wind, the dynamics of water and the trajectories of dirt particles, and you can begin to appreciate the difficulties of simulating water and dirt.

This is why such analysis requires the combination of aerodynamic and hydrodynamic simulations. As the water droplets on the vehicles surface are so small, these local flow fields don't have a major effect on the vehicle’s aerodynamics. Therefore, computational fluid dynamics (CFD) simulations evaluating the global aerodynamic performance of the vehicle are completed first. Then, this flow field is used for separate simulations where liquid particles are injected into the simulation to predict the forces and trajectories of water and dirt particles. 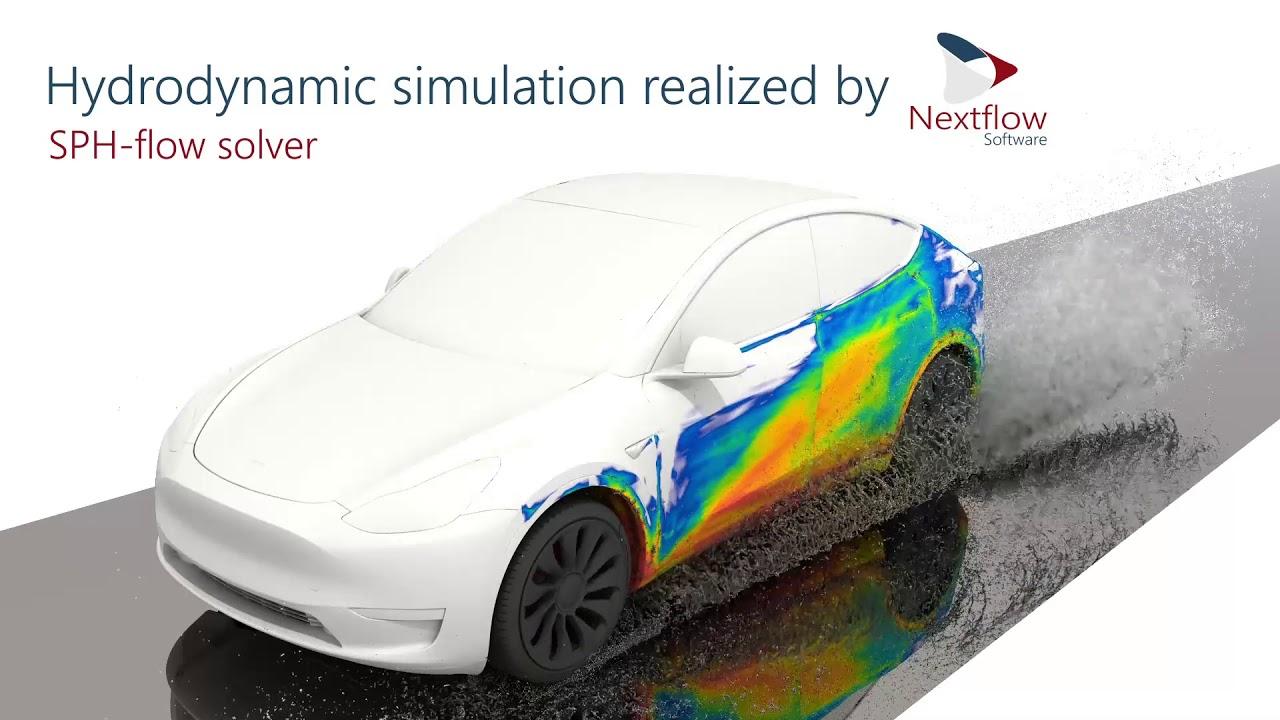 ‘If we need to conduct a more detailed analysis we can also add in some particle refinement algorithms. This allows us to evaluate the wettability effect such as surface tension, dynamic contact angle etc of smaller particles in more specific areas,’ says Julien Candelier, the technical team leader at Nextflow Software.

Of course, such complex simulations require a substantial amount of computing power. ‘The main challenge is memory management,’ highlights Candelier. ‘That’s why everything is modelled as a steady flow using a mean value of diversity of car wake. Even with that we are dealing with gigabytes of data.'

'To cope with this, we do some parallel computing for the liquid phase to achieve efficient simulations. For example, a full wheel soiling simulation can run in 20 hours on a regular desktop.’

The ability to accurately model liquid flows quickly and efficiently means that these simulation techniques can also be used for other flows within a vehicle. For example, e-motors can rotate up to 15,000rpm, generating airflows that can significantly effect oil flows within the transmission.

‘We use the same technology to study the cooling and lubrication performance of rotating gearboxes,’ reveal Candelier. ‘Using a similar approach, we assume the oil flow doesn't influence the overall airflow, but the airflow does influence the oil flow.’

‘A Formula E team used our software to investigate a gearbox issue where the oil temperature was rising by 1degC or 2degC per lap. The engineers were able to reproduce this phenomenon with our software, test, validate and develop a new design which solved the issue.’

So, next time your car gets dirty – just think how many more times you would have to wash your car if it wasn’t for simulation.

Run Your Own Simulation