Always wanted to work in Formula One? Then join the Voyager-AirShaper F1 team!

We've created a virtual challenge to optimize the aerodynamics of the Voyager-AirShaper F1 car through AirShaper simulations. The current design started life as a visual styling exercise - featuring a bespoke blue livery - 3D modelled by Voyager. But the car is just that – a styling model. A 3D model created to look stunning and realistic, but not engineered to perform well in terms of aerodynamics.

It doesn't comply with the official regulations, and we don't intend to make it comply. Rather, this exercise is about how you can tweak an existing design to perform better in terms of aerodynamics through modest and realistic changes. And we'll do so based in your input!

We've run aerodynamic simulations on the reference car – the current styling model. Both feature rotating wheels, moving ground and an adaptively refined mesh, but they differ in terms of accuracy:

This already poses the first challenge - which results will we use?

When it comes to running CFD simulations, you'll always need to make a compromise. Using the Regular Simulation will make it easier on your hardware to process data, the simulations will be faster and easier to run, etc. You'll be able to run more simulations with the same "teraflops" CFD budget, just like real F1 teams. If you're working on large flow structures, this may be enough. But when looking at small scale vortices, or need to mesh small details, it may not be sufficient.

Design challenge #1 Think carefully about which data to use for which area on the car.

Design challenge #2 Use the online viewer and paraview to gain insights into the flow and share your findings.

The car does not comply with the official regulations and we don't intend to make it to. Nevertheless, the goal of this challenge is to come up with solutions that are realistic and stay close to the rules:

In reality, things are far more complex, with cars chasing each other, cornering simulations and so on. But for the sake of simplicity, we'll focus on an isolated car going in a straight line at a constant speed of 200 km/h.

To achieve our goals, we will use your input!

Just drop your thoughts on the AirShaper Reddit channel (use the flair "Voyager-AirShaper F1"):

We'll screen the Reddit channel regularly and gather design input. As soon as we have enough input, we will create an updated 3D model, run a simulation and share the results on the Reddit board!

A big thanks to everyone who has contributed to the F1 challenge on our AirShaper Reddit channel! We sat together with the talented designers at Voyager to implement most of the suggestions, resulting in aero update 1 (Download 3D Model here):

The downforce on the front wing improved dramatically, with low pressure zones on the suction side being much more pronounced, now extending to the second and partially the third wing element.

The result is less flow separation at the inlet and stronger vortices further downstream, resulting in a lower pressure and thus more pronounced suction effect across the majority of the underfloor.

The bib (sort of scoop around the central part of the underfloor) was added, grabbing some extra downforce (as the pressure on top of it pushes it downward - even though some of this is cancelled out as this higher pressure also acts on the surface above the BIB).

Other small changes include updated barge boards and a different nose angle.

The result is Aero Update one, featuring massive performance improvements:

That's a 64% increase in downforce while reducing drag by 3%, combined with an improved aero balance (more downforce at the front). It's a no-compromise, pure improvement in aerodynamic performance!

We explain all of this in detail in the video below: 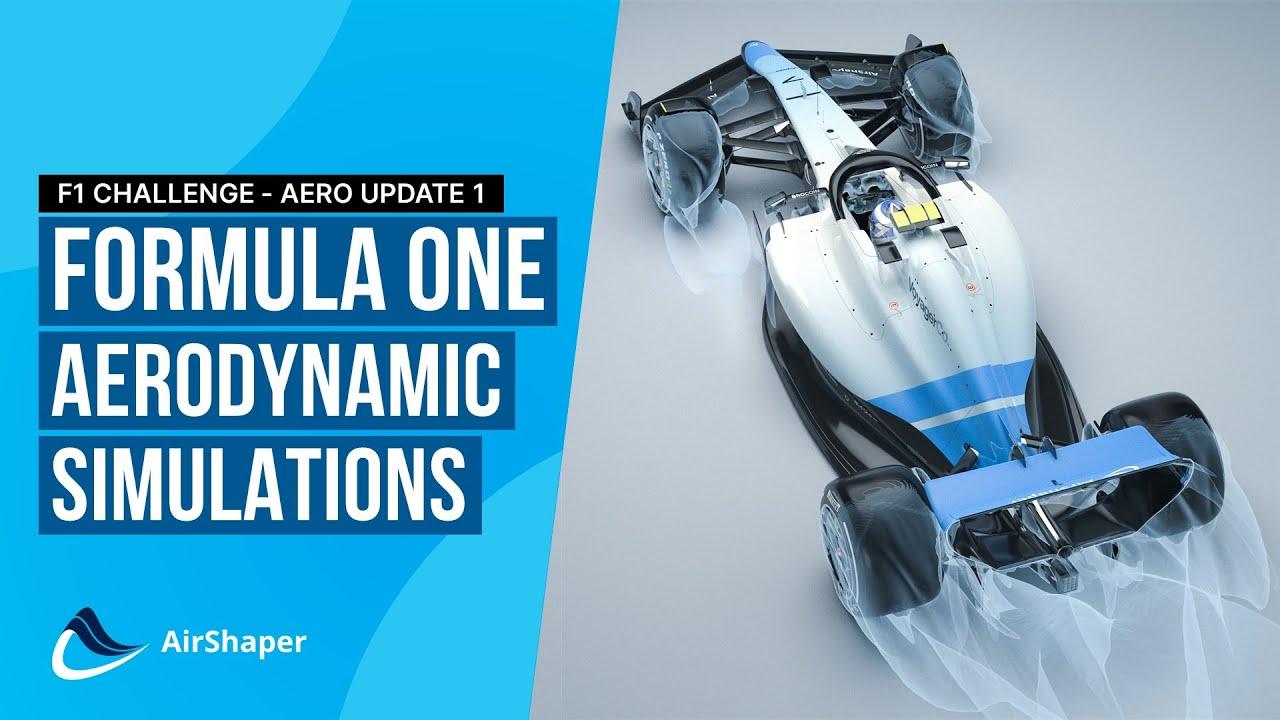 UPDATE: we found an error in the simuolation setup for Aero Update 1: the rear wheels were positioned slightly above the ground. This created a small gap between the wheels and the ground, creating a venturi channel (converging-diverging channel). This strong acceleration of the air lowered the pressure (because of the Bernoulli effect), creating downforce on both rear wheels. Once corrected, we found that the downforce gain was not 64% but 44%. Still massive, but not as much as claimed previously. This goes to show just how sensitive CFD and aerodynamics are to small changes - our apologies!

Again a massive thanks to everyone who has contributed to this second Aero Update. It was brilliant to see visuals, sketches and even YouTube videos appear on our AirShaper Reddit channel! As before, the guys at Voyager implemented most of the suggestions in 3D to get to aero update 2 (Download 3D Model here):

The result is attached flow all the way to the rear of the sideopods. We still have a lot of flow separation at the inlets, as the air jumps across the sidepods. So there we still have room for improvement.

The BIB has been made sharper to reduce the local pressure buildup.

The airfoil design was not changed (that is the topic for Aero Update 3) but we moved from a double support arm structure to a single one. Also, the swan neck geometry was pulled forward, to reduce the separation it induces at the suction side of the wing.

The result is Aero Update two, featuring a further increase in downforce but in drag as well:

We explain all of this in detail in the video below: 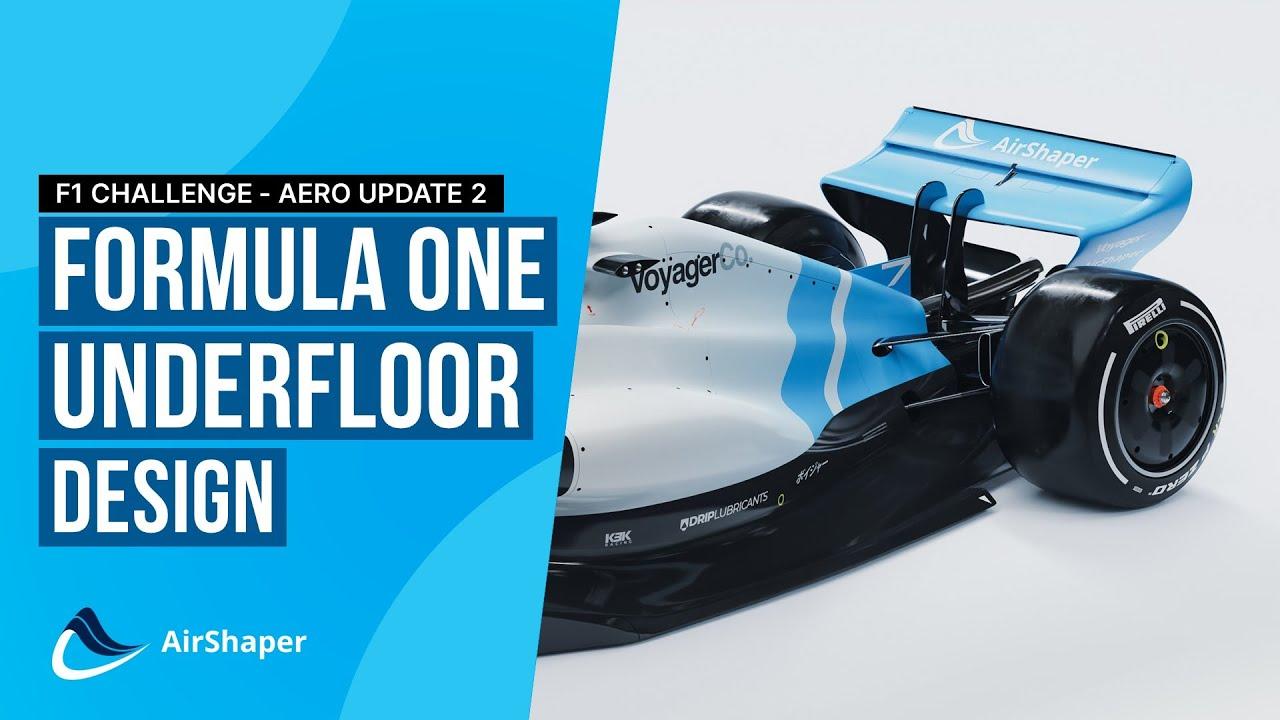 We're happy with the added downforce but sad about the extra drag! So the goal for the third aero update is to reduce drag. We suggest working on the sidepods (flow separation at the intake) and the rear wing (we'll use proper airfoil designs this time) but all ideas are welcome! Just analyse the online results and download the 3D model to get started.

The goals for this aero update:

If you wish to contribute, just head over to our AirShaper Reddit channel and drop your images / sketches / videos - thanks a lot!