How to calculate Reynolds number 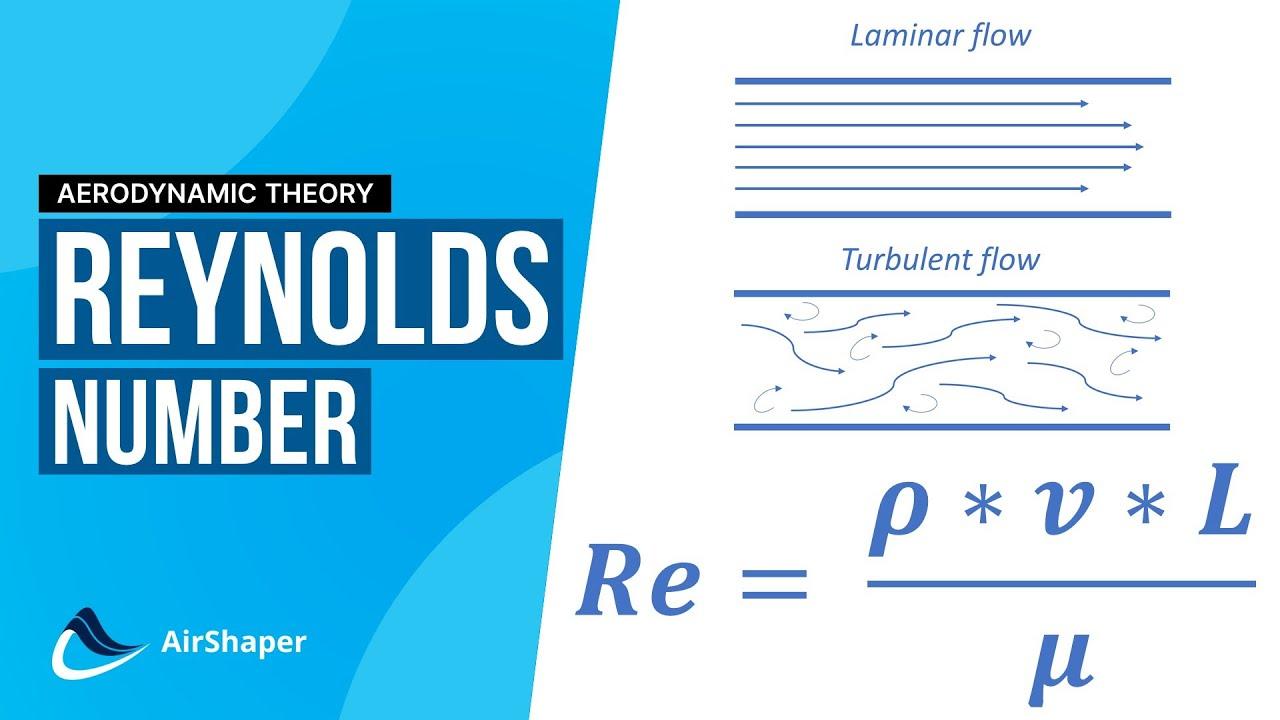 The relation between Turbulence, Reynolds, and Wind Tunnel Testing

What is Reynolds number?

The Reynolds number is a parameter that describes the flow characteristics of a moving body of fluid. It is the ratio between the inertial forces and the viscous forces within a fluid and can be calculated using the equation below.

This dimensionless number has no direct physical meaning. However, it provides a useful insight into the behaviour of the fluid by characterizing the relative influence of both forces. Determining which force is dominant can predict whether the fluid is laminar or turbulent.

Every fluid has viscosity, or a tendency to resist flow. This is easy to visualize when pouring thick syrup from a bottle. At low Reynolds numbers, these viscous forces create a damping effect which results in a steady, orderly trajectory or Laminar flow.

At high Reynolds numbers, the inertia of the fluid is large enough to overcome its viscosity. Therefore, the flow becomes erratic and irregular, known as Turbulent flow.

To visualize the difference between laminar and turbulent flow, watch water pouring from a sink faucet. If you open the faucet slightly, it will produce a steady, clear stream of water, similar to laminar flow. Open it completely and you will see a nervous, uneven flow, similar to turbulent flow.

There is a range of Reynolds numbers where the flow is neither purely turbulent or laminar. Instead, it is in a transition state between the two. For flow in a circular pipe like the sink faucet, the flow regime is characterized by the following Reynolds number ranges:

The importance of Turbulence

When designing any component subject to fluid flow, it is critical to understand whether the flow will be laminar or turbulent. Each regime has its own unique characteristics. For example, laminar flow, has less skin friction than turbulent flow. While turbulent flow mixes with the surrounding air and retains more kinetic energy, allowing it to stay attached to surfaces for longer.

The more complex an aerodynamic system, the more important it is to understand the operating flow regime. The size and shape of a component affects the characteristics of the air flowing around it. This can then affect the performance of other objects downstream.

When fluid flows over an object, viscous forces slow down the molecules closest to the object's surface. This results in the relative velocity at the surface converging to zero and is referred to as a 'no-slip' condition. This layer of slower air between the surface and the free stream is called the Boundary Layer.

The larger the area the fluid flows over, the more space the boundary layer has to grow because more fluid is slowed down. Even when fluid flow begins as laminar, a critical point can be reached where the flow is destabilized and becomes turbulent.

If all other variables (such as fluid density, viscosity, and velocity) are constant, then the characteristic length can be calculated for a given Reynolds number. Setting this equal to the transition zone between laminar and turbulent flow can be used to estimate a critical length. After which the flow will be turbulent.

This phenomenon can be experienced in real life by observing smoke rising from a candle. The smoke initially exhibits laminar flow, but after a certain height, begins to transition towards turbulence. All three flow regimes can be observed in the same wisp of smoke, so you can easily estimate the critical length of the flow.

The Reynolds number is not a real physical property, but rather a subjective method to characterize flow. It works best as a comparison tool instead of an absolute measure.

It is impossible to achieve perfect correlation between different aerodynamic tests unless they are carried out with identical conditions and procedures. This is why a constant Reynolds number is used between tests, to ensure the fluid is operating in the same flow regime. This is the most effective way to conduct an accurate comparison if it is impossible to exactly replicate the desired conditions.

Suppose you need to measure the lift and drag characteristics of a car at 40 kph to correlate with CFD simulations. However, the wind tunnel available is only large enough to accommodate a 1:3 scale model. By calculating the Reynolds number for the full car, you can then determine the air speed you need to conduct a representative wind tunnel test.

As the Reynolds number is not a physical parameter, consistency is extremely important when carrying out aerodynamic analysis. Published equations for characteristic length and turbulence transition range exist for a variety of shapes. But none of these will perfectly match the object you are analysing.

It is not always worthwhile to try and find the perfect definition of a value that has no direct physical meaning. Instead, it is best to pick a reasonable definition and stick to it. The consistency retained between data sets, the greater the validity of the Reynolds number as a tool for comparison and characterization. This consistency enables standardization on a global scale as we continue to push the frontiers of fluid dynamics.