The aerodynamics of motorcycle wheelies 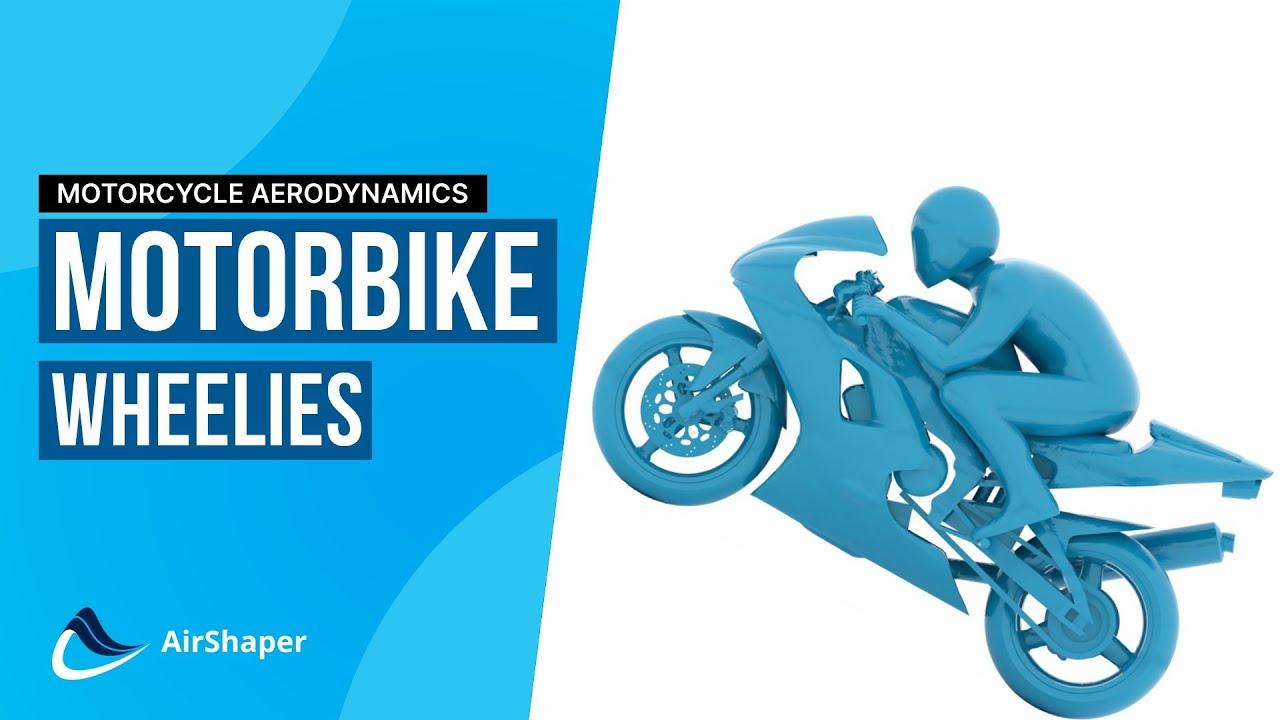 Motorcycle wheelies are an impressive display of both power and control. The physics behind wheelies is surprisingly complex and aerodynamics plays a crucial role in maintaining stability.

On average, the drag coefficient of a motorcycle is double that of a typical passenger car. The open wheels, sharp edges, exposed components and constantly moving rider makes it extremely difficult for airflow to remain attached.

Consequently, the airflow separates causing a low-pressure wake behind the motorcycle, which in turn creates a significant amount of drag. The extra force the motorcycle needs to overcome this drag results in reduced efficiency, acceleration and top speed. Therefore, minimising flow separation is a top priority for motorcycle manufacturers.

The physics behind a wheelie

When a motorcycle accelerates, the rear tyre applies a force to the ground which propels the bike forwards. This is counteracted by the motorcycle’s inertia and drag force which act at the centre of gravity and aerodynamic pressure. The centre of pressure can be calculated by averaging the aerodynamic forces across the bike’s surface.

These forces create a moment that tries to rotate the bike around the rear wheel, which acts as a balance point. However, the force of gravity generates a moment that acts on the bike in the opposite direction, keeping the front wheel on the ground. When the moment from the drag and inertia forces overcomes the gravity moment, the motorcycle will begin a wheelie.

Learning wheelies can be both impressive and exciting to watch. However, the rider must apply careful throttle and rear brake control to avoid a flip. This is a sign that the motorcycle has reached its maximum possible acceleration rate. In high-performance applications, designers work to avoid wheelies so that the maximum amount of power is translated through the wheels to the track.

If properly designed, the aerodynamic forces generated by a motorcycle can keep the front wheel on the ground. For example, minimizing drag will reduce the overturning moment acting on the bike at speed. Similarly, generating downforce will create an additional moment which will counteract the moment created by acceleration and drag.

In 2010, Ducati introduced winglets to the front of their MotoGP racing bikes. These elements are very small and only produce a small amount of downforce. However, the position of these devices means that the downforce is concentrated above the front tyre; preventing wheelies.

Although downforce can be key to performance on the straights, in the corners it has a much more complex effect. The aerodynamic vector tilts with the lean angle of the bike. Therefore, downforce generates more pressure and more grip, but it also pushes the bike away from the apex of the corner.

Consequently, downforce only improves cornering performance if it's vector can be kept as vertical as possible with a tyre friction coefficient higher than one. While another tactic is for the rider to lean into the corner more than the bike.

A motorcycle may not be as aerodynamically efficient as other vehicle types. But aerodynamics can still make the difference between victory and defeat.