How to improve Motorcycle aerodynamics 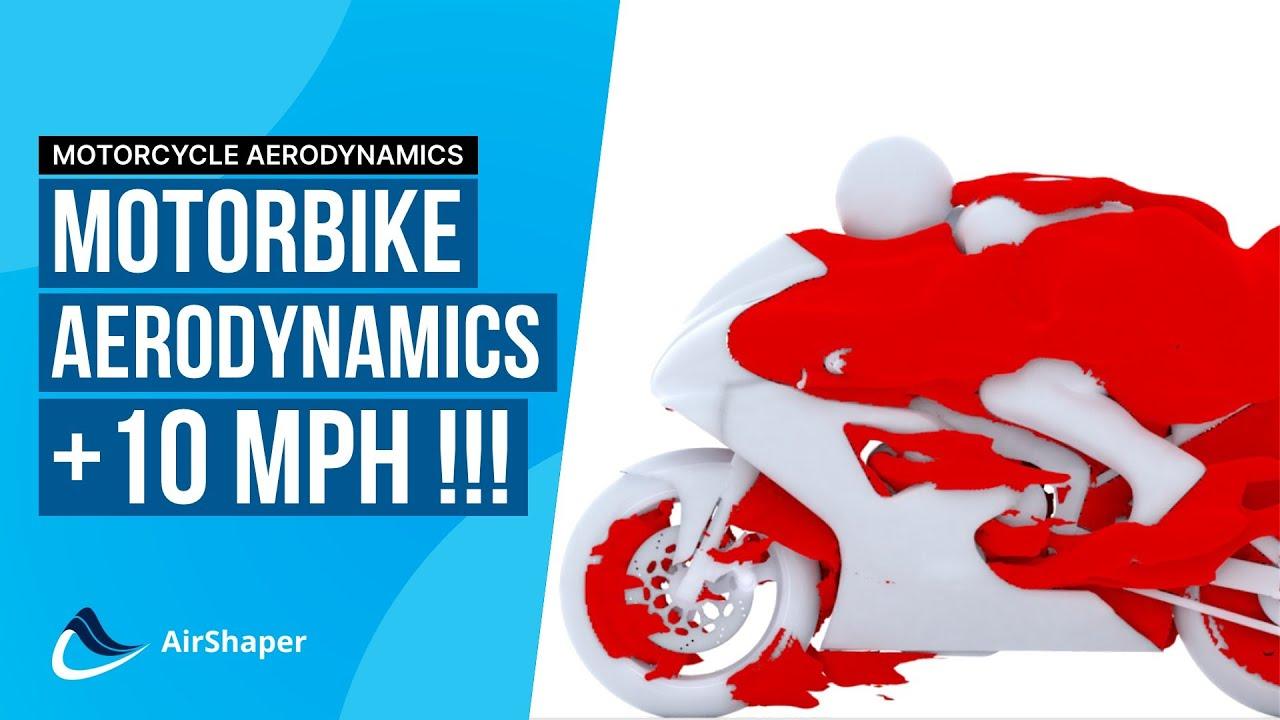 Put a car and a motorcycle side by side and you would be forgiven for assuming that the motorcycle is more aerodynamically efficient. After all, the frontal area of an average motorbike is two thirds smaller than an average car, so surely it should travel through air more easily?

Unfortunately, open wheels, sharp edges, exposed components and a constantly moving rider cause all sorts of disturbances to the airflow. This makes it extremely difficult for air to remain attached and so the flow separates, creating wakes and generating drag. Consequently, the drag coefficient of a motorbike can range from 0.5-1.0 which is double that of a modern car.

Total drag is calculated by multiplying the frontal area by the drag coefficient as well as the density and velocity of the fluid. So despite the smaller frontal area, the drag coefficient of a motorbike is so high that its total drag is often larger than a car. Optimising the aerodynamic performance of a motorbike is a huge engineering challenge.

The centre of pressure is relatively high above the ground for a motorcycle. The consequent moment tends to rotate the bike around the rear wheel, pushing the bike backwards. This reduces the contact pressure of the front wheel to the ground which can lead to less steering control.

As the aerodynamic drag force increases with the square of velocity, this can become a major issue at high speed. Therefore, it is crucial to try and get the centre of pressure as low to the ground as possible. Another tactic to counteract this moment is to generate downforce on the front wheel.

Effect of side wind

Another consideration in motorcycle design is minimising side-wind sensitivity. Wind conditions are constantly changing and as air hits the front of the bike at large angles, its effective frontal area increases. This not only increases the drag force, but also generates a side force that can destabilise the bike.

While crouched in a riding position, the human body creates a very discontinuous flow profile. Riders are also constantly shifting position, resulting in highly inconsistent flow conditions and flow separation. To help mitigate this, rider's can be educated to optimise their seating position to reduce their frontal area. They can also modify the position of their feet, which in some cases can help direct flow into the rear wheel, reducing drag.

Of course, the optimum riding position will differ for each bike. That's why CFD and wind tunnels can be valuable tools to tune the performance of each specific motorcycle design and rider. In fact, by making a few simple tweaks to the rider's posture, you can increase top speed by up to 10mph, as explained in the video above.

Helmets are designed to extend rearwards towards the back protector to close this gap. While small spoilers can sometimes be placed on the rear of helmets to ensure that separation occurs at a fixed location.

The aerodynamic performance of the bike can also be improved, with big gains possible by only making minor changes. Smooth wheel covers can be used to enclose the spinning spokes and reduce the onset of turbulence, which in turn minimises drag. This also allows designers greater freedom to control the air flow as it transitions to the rear of the bike.

Winglets can be located on the front of the bike either side of the engine air intake. This was pioneered by Ducati in 2010 in MotoGP. These winglets help to generate front downforce as well as reduce the likelihood of the bike going into a wheelie under acceleration.

Although, unlike racecars, more downforce does not always increase performance. Downforce will always act with the lean angle of the bike, which can cause issues during cornering. When a rider leans into a turn, the downforce component points outwards, away from the corner apex which can effectively push the motorcycle out of the turn. That's ok if the friction coefficient is equal to or larger than one, but if it's smaller, this will reduce the maximum cornering speed.

Optimising the aerodynamic performance of the bike and rider doesn't just reduce drag, it can also help generate power. Air intakes should be located close to the front stagnation point or near other areas of high pressure. This higher pressure will increase the density of the air flow into the engine, allowing the engine to burn more fuel and generate more power. This technique is known as the ram-air effect and has been exploited across a wide range of vehicle applications.

Increased flow pressure is equally important for engine cooling. Fluids prefer to move from areas of relative high pressure to areas of low pressure, otherwise known as a favourable pressure gradient. Increasing the air pressure in front of a radiator can increase the total pressure gradient across it. The end result is improved air flow for cooling performance.

Despite the aerodynamic challenges of motorcycles, there are a variety of techniques that can be used to reduce drag and boost performance. The key is to test and refine these techniques in controlled test conditions using wind tunnels and CFD simulations. These, along with flow visualisation techniques can also be a useful way to illustrate the behaviour of airflow and teach the rider the important role they can play in optimising aerodynamic performance.