Fundamentals of airfoil design and selection 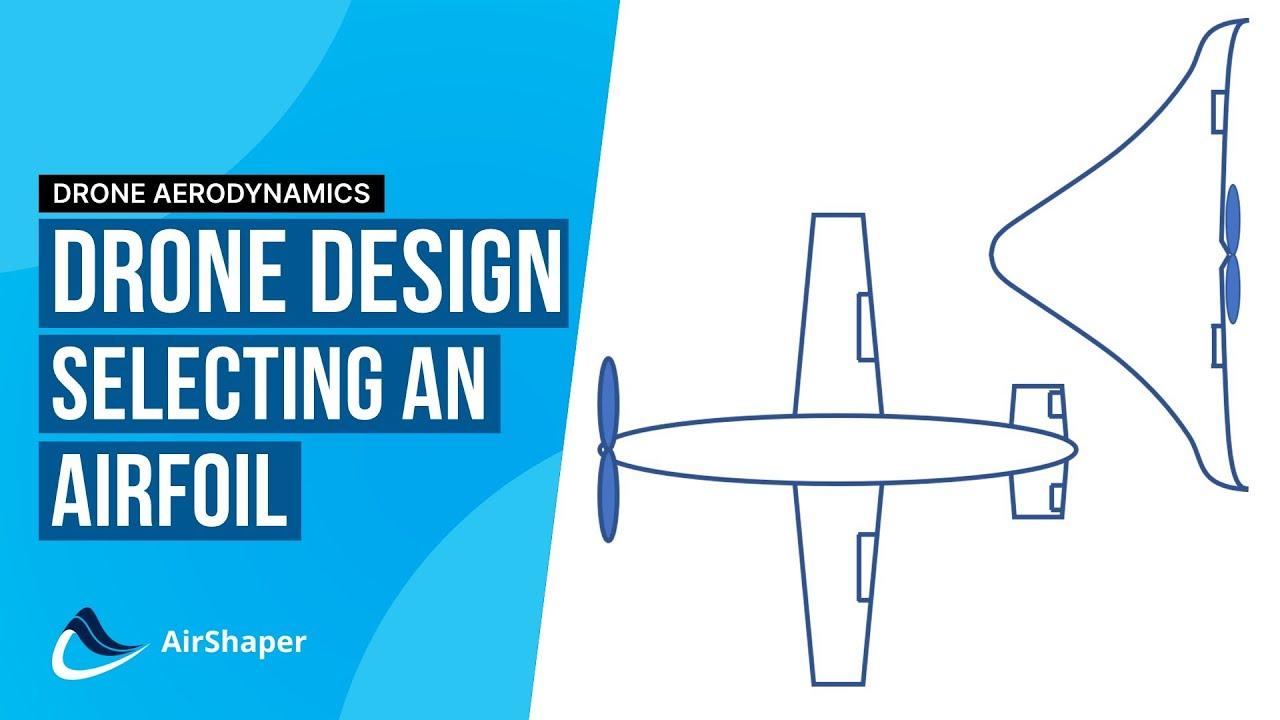 Whether it's a wing for an aeroplane or a small drone, designing the optimum airfoil profile can be challenging.

Here's our guide to the most important aspects you need to consider when designing and selecting an airfoil.

First, let's discuss how airfoils create lift force. We can begin by naming the basic components that make up an airfoil:

The leading and trailing edges are connected by the upper surface and the lower surface of the airfoil. The relative wind direction can be calculated from the velocity vectors of both the wind and the object itself.

Lift is the force generated by an airfoil perpendicular to the wind, while drag force is measured along the wind direction. When normalized by the planform area and the dynamic pressure, the lift and drag coefficients, CL and CD, can be calculated. These are commonly used as metrics to compare wing performance. Airfoils generate lift by displacing the airflow, inducing a net curvature as air is directed downwards. Air travelling over the upper surface accelerates while air along the lower surface slows down.

According to Bernoulli’s principle, this creates an area of low pressure above the wing, and high pressure below the wing. The resulting pressure difference between the two surfaces is what generates a lift force. This is why the upper and lower surfaces are also referred to as the suction and pressure surfaces, respectively.

The lift and drag forces generated by an airfoil vary as the angle of attack changes. This will be demonstrated with an example using a typical airfoil profile known as the NACA0012.

The NACA0012 is a symmetrical airfoil which generates zero lift at zero angle of attack. The lift coefficient increases with angle of attack, up until a drop-off point around 15 degrees. This is known as the stall point of the wing and is due to boundary layer separation on the suction side. A typical example of this is when an airplane pulls up too fast during take-off; entering the stall zone and losing lift.

Another effect of increasing the angle of attack is an increase in drag. The lift-to-drag ratio is a popular metric for comparing the trade-off between the two. Here, a higher number indicates a more efficient design. For the NACA0012, peak efficiency is achieved at an angle of attack of 8 degrees.

Asymmetric airfoils can generate higher values of lift at a greater efficiency than their symmetric counterparts. This is possible by sacrificing performance at negative angles of attack, which means they have a narrower effective operating window. This is demonstrated by comparing the symmetrical NACA0012 to the asymmetrical NACA6412.

Airfoil performance is usually characterized by the calculation of drag and lift coefficients, instead of the absolute force produced. These generalized coefficients allow you to compare different airfoils for any given cross-sectional area.

The performance of an airfoil also changes with different Reynolds number. It is important to use the appropriate value for your application beforehand to ensure you are properly evaluating a potential design.

Airfoil selection generally involves compromise between optimal performance, efficiency and a consistent range of operation. When comparing wing designs, make sure your performance priorities align with the intended application.

There are two common styles of drone design: 1) Rotary drones 2) Fixed wing drones. The former, such as quadcopters, rely on propellers to generate vertical thrust and hold themselves aloft. Whereas, fixed wing drones use conventional wings to generate lift as they travel through the air.

The layout of a rotary drone enables hovering, but fixed wing drones are significantly more efficient, enabling longer flight times. Fixed wing drones can come in a variety of configurations. Some look like traditional aeroplanes, while others adopt futuristic single-piece profiles. All designs rely on airfoils to generate lift force.

For flaps, wings and rudders that need to generate both positive and negative lift, symmetric operating curves and profiles are preferable. If flaps are in a neutral position for most of the time, then select an airfoil with low drag and zero angle of attack. If the drone needs to change direction quickly, then an airfoil with more performance and a wider lift curve is required.

The data used to create the above plots was generated from Airfoil Tools. This is a fantastic website providing access to data on a wide range of airfoils. It is easy to explore and compare different profiles without resorting to expensive wind tunnel testing.

If you cannot find an existing airfoil that meets your requirements, you may want to consider designing your own profile. For this, we recommend visiting XFOIL and xflr5. These are free, popular, and easy to use airfoil design tools that you can download straight to your desktop. So, whatever application you're designing an airfoil for, hopefully this article will help you achieve the optimum design!